NYRR Run as One

I know I've said that I'm over Sunday races (I just can't stay sober for an entire weekend), but I signed up for the NYRR Run as One 4 mile race because I knew I had the Wendy Walk later that day. If I could haul my ass out of bed for the race, I knew I would definitely make it to the walk.

Obviously I went out the night before (my presence was requested at a going away party, and who am I to say no?) and I woke up and really didn't feel like racing. I was awake with more than enough time to get ready, but I decided to read a few chapters of Fifty Shades of Grey, and as usual found myself sprinting to the starting line. The race had already begun but I was able to hop in with the other yellow bib wearers about 50 feet behind the line.

It was definitely a run that required music. I think I listened to Goyte's "Somebody That I Used To Know" like eight times and some Skrillex. I'm not actually that sure anymore, mostly because I was still a little drunk. This 4 mile race follows the same course as the one I ran in April of 2011. It starts at 68th on the east side, goes up and cuts across the 102nd traverse, heads back down the loop and finishes on the 72nd traverse. I was handling myself pretty well and didn't need to weave much until I got up to the hundreds. I wasn't sure if I was slowing down or not because my Garmin never picked up its signal (this is why I shouldn't show up late to races!) and the distance was too short to bother. Mile 3 felt like a bitch and a half. The hill that normally feels like nothing in comparison to the Harlem Hills suddenly felt like Kilimanjaro and I could taste vodka in my throat. I had flashbacks of chugging vodka over ice while ignoring the people around me the night before. Let's be honest here, what the hell am I going to do at a party of mostly girls that I don't know? I subtle move, I drink, I run, and I passionately fight for ed reform. Drinking was the only activity that made sense. (Actually, later in the evening I found myself discussing the pros and cons of last in first out outside of Sweet and Vicious and it was the best part of the entire night.)

When you're thinking about throwing up at mile 3 of a 4 mile race, the only thing left to do is truck it. You're going to boot or your not, but there's no reason to lose time over it. I channeled the beast and started hauling ass towards the finish line.

My coworker said he saw me passing people like woah. He beat me anyway. 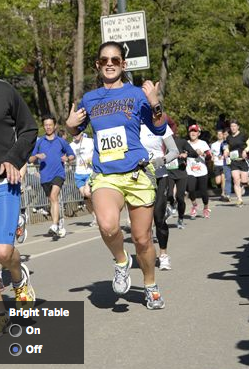 Look at those legs muscles! Does anyone else's form drastically change when running sub 7 minute miles? I propel myself forward and I actually feel a lot better, but I feel like I'm wasting a lot of energy if I use the same form when running slower. It feels awkward.