I upped my macros to 145 P 145 C 65 F and told myself I have to eat that as a minimum every day. It's been rather freeing to see those numbers as the baseline and not the limit. I've hopped on the scale a few times but have purposely told myself to ignore the number. I think I look more defined weighing in at 145-148 lbs this week than I did when I hit 140.2. I'm sure it has something to do with water weight. 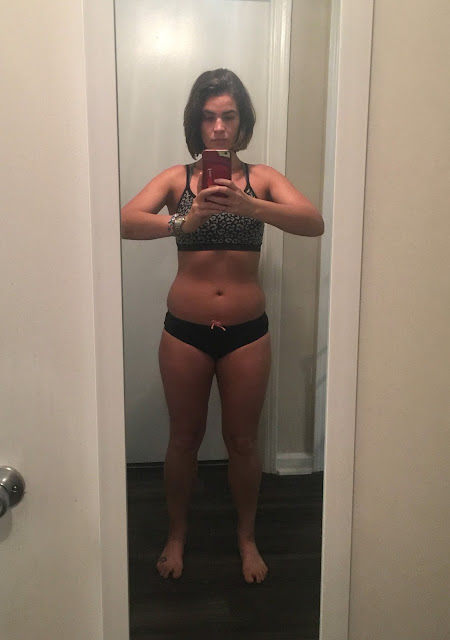 I've been kidding around that I'm a fat kid diet, but I really just want to get strong again. I returned to CrossFit last fall pretty weak compared to where I had left. I had lost and then gained weight and lost muscle mass. I don't compete in Olympic Weightlifting so it's not like I have to make a weight class. I want to start PRing lifts again.

Sometimes I get down on myself because I see girls at the gym who now move 95# overhead like it's big deal and I used to be stronger than them. I know I need to work on my mobility and fix my right shoulder. I know that I took time off last summer and then went away all fall. But it still frustrates me. I've also felt torn by too many goals that are all over the place, so I decided to simplify things - get as fucking strong as possible.


Yesterday was a good workout that showed me how far I've come. When I first started at CrossFit Identity in the summer 2014, we had this workout of 15-9-6-3 front squats and handstand push-ups. I used 85# because the Rx weight was 105# and too heavy for me to clean. I had to do all of my 85# front squats unbroken because I could only clean that amount once per round. Last night I hit a squat clean at 135#. I've been chasing this number since September. I tried for 145# and I got the bar high enough but I didn't pull myself underneath it fast enough. Now I want that bodyweight clean and I'm going to get it.

We retested Fran last night. I just did Fran at CrossFit Hell's Kitchen on June 24, and I knocked another 30 seconds off my time. Brandon was talking us through the workout and said that we'd be proud of our times if we did the round of 15 thrusters unbroken. I wanted those 15 unbroken thrusters so badly. I wouldn't put the bar down. The most feral sound emanated from my throat. It sounded like an animal was dying. My pull-ups were better than they have ever been before (thanks Victory Grips!), but I did break up the set of 9 thrusters.

Not trying to lose weight is very scary for me. I have lost and gained weight so many times because I only feel comfortable and in control when I am restricting what I eat. I have struggled with maintenance and never maintain my progress. I'd like to be able to maintain my leanness on the highest number of calories possible. I want to put on muscle. Dammit, I want ripped arms!