The Best Week in New Jersey Ever

This morning I woke up from a really weird dream where I was at a house party in Princeton, NJ and something really creepy was living in closets filled with water in the basement. While definitely terrifying, it was also a really fun party. Frank was there but he did not want to go in the basement, because he is smart.

My dream got me thinking about the last time I was in New Jersey. I fly up a few times a year to attend meetings with the New Jersey Commission on National and Community Service. Last month's meeting was held at Mercer County Community College in West Windsor and I decided to stay at the Hilton Garden Inn in Hamilton. Dude, I stay in several hotels a month and we know I've got loyalties to Hilton, especially Garden Inns, but this was my favorite hotel to stay in ever. I walked in and it was like Cheers. There's a bunch of regulars who come in each week for work and everybody knows their names and I really really wanted to become a regular too. There is also a mini putt putt course. And party lights in the lobby. 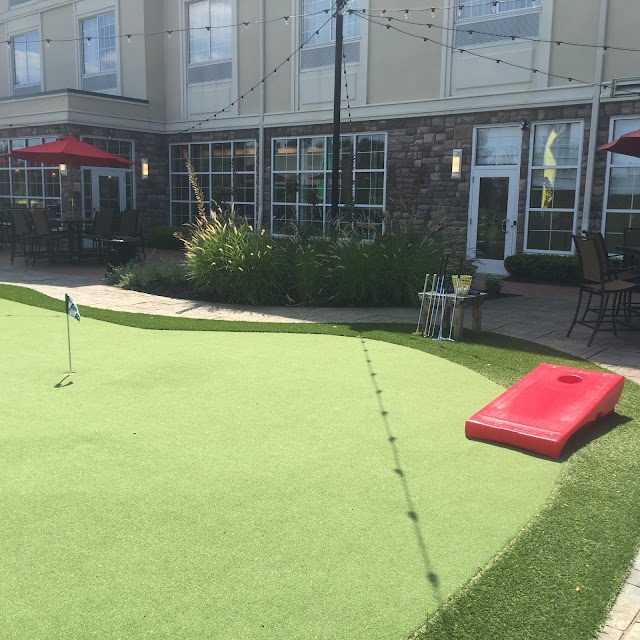 The NJ Commission is one of my favorites to work with and I have good relationships with the other program managers, so it's kind of like a little reunion every time we go to these things.

I dropped in at CrossFit Hamilton and I think it was the best drop in experience I've had. The coaches are really topnotch. Joey Dill is on HQ seminar staff and puts together these awesome instructional videos for CrossFit Hamilton's Instagram. I had the pleasure of being coached by Alex Booth the first day and Jake D'Angelo the next.

Wallballs have always been my goat and Alex had such great feedback for me about slowing down but doing more reps in each set. I was just ramping my heart rate up so it felt like I was working hard but I wasn't getting much done. He also spent a lot of time showing me how I can false grip a clean to be more efficient in low weight, high rep clean and jerks. I'm not a member there and probably won't be back for several months. I appreciated his willingness to invest his time and knowledge in me even after class was over.


I PR'd my power snatch at 85# the week prior. It's the heaviest weight I'd lifted in any snatch variation, I did it once, and it looked ugly as hell. One week later, I'm in class with Jake and he gave me a lot of solid cues and I hit 85 several times. I even muscle snatched it once. I try to snatch 85# at least once a week just to reinforce that I can do it and I'm hitting it each time I try. So basically I struggled with the snatch ever since I moved to Georgia (I somehow miss snatch day every damn time because I'm traveling for work) and one day at CrossFit Hamilton fixed it.