Not Getting Kidnapped in Alexandria, VA

A couple of weeks ago, I had to fly into DC for a conference in Alexandria. It conflicted with a work retreat, so I ended up being there for less than 24 hours and only attended the opening session. Serious waste of time and money, but I did enjoy a nice run. 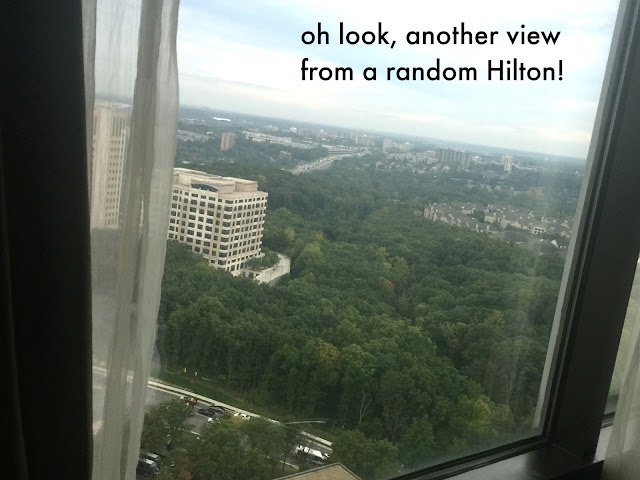 I like to look for potential running routes on MapMyRun when I'm in a new place. Then I compare the route to Google maps to make sure I understand where I'm heading. I had a general idea of where I wanted to go and set out from the hotel.

I wasn't sure about all of the green space I saw on the map, but I figured I'd find something nice and I did. I made a random right and found the entrance to the Dora Kelley Nature Park. 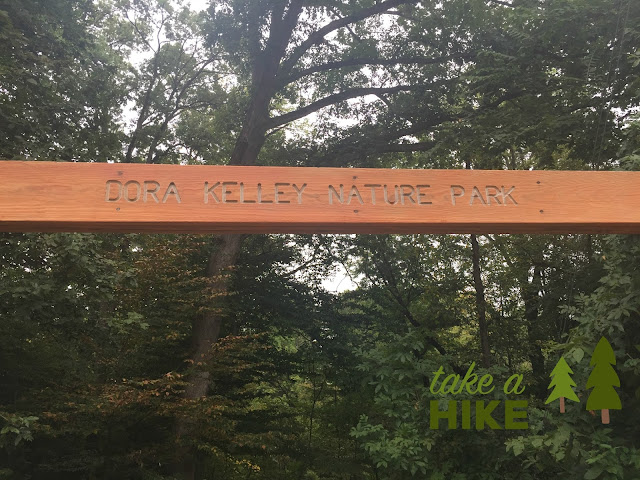 I used to feel really comfortable running on trails, paved and otherwise. Now I don't feel safe running outside ever. Getting on this trail by myself was a big deal. From a safety perspective, it was probably pretty stupid. I don't know anyone in Alexandria and no one knew I had gone running. It looked well marked and there were people out walking, running, and riding bikes. I made sure to say hello and make eye contact with every person I came across. That way, if I did get kidnapped, the police would have people to interview. 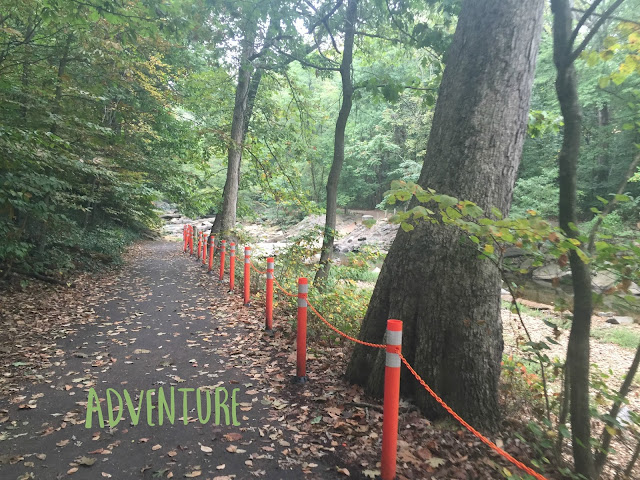 I saw signs about a missing dog named Echo. If you are in the Alexandria or DC area, would you please keep an eye out for this pup? My heart breaks when I see flyers for missing pets because I know that I would be devastated if anything happened to Frank or Daisy Mae. Let's get the word out and getting this baby home. 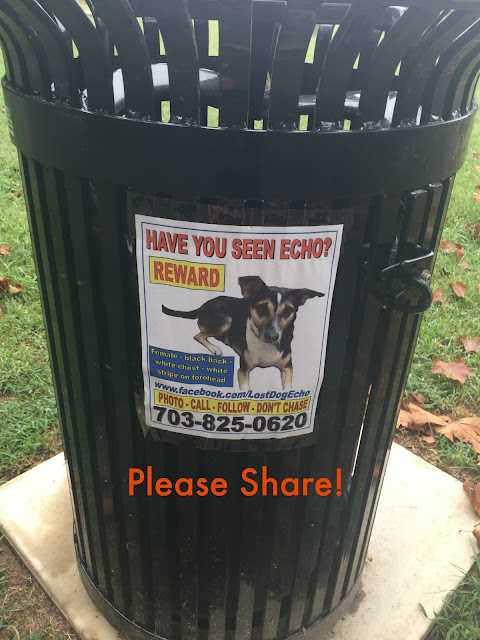 I kept following the path and started coming across these stepping stones to cross the creek. It was fun the first few times, but after like 5 of them, I was like eff this and decided it was time to turn back. 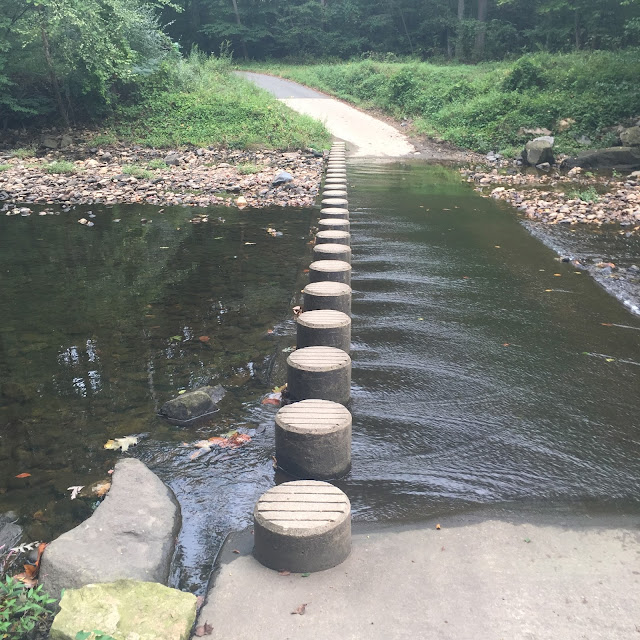 I passed a lady talking on her cellphone right around one of these things and I said, "Good morning! On your left!" and she got startled. She said I scared her and I apologized. But for real lady, talking on your phone alone in the woods is a great way to get yourself attacked and dragged into the bushes. She didn't realize I was there until I was right next to her. Aren't I super fun with all my warnings about how we're going to be attacked and die while trying to get some exercise in the great outdoors? 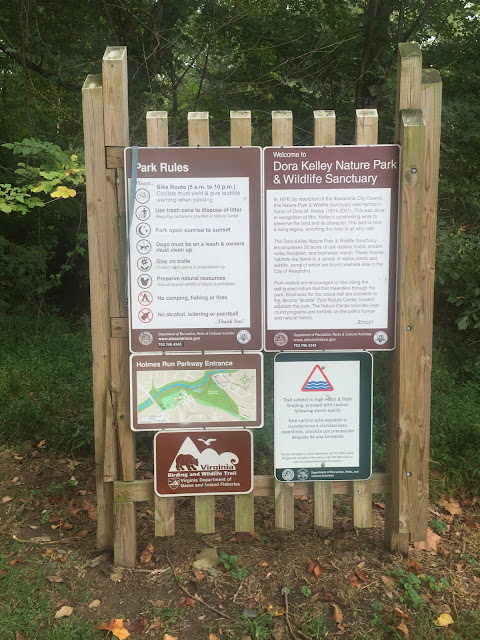 I took an obligatory nature selfie because that's what you do when you have a blog. That sweet lobster headband is from Brady Bands. They are the best because they are lined with velvet and do not slip, AND because they are for a great cause. "Brady Bands was named after the founder’s son Brayden, a courageous little boy who passed away in June 2012 after a year long battle with brain cancer. Brayden’s diagnosis and death highlighted the need for more funding and research to be done to find a cure for childhood cancer. Brayden’s story has touched many and has ignited a fire in those who knew him to do more to fight against childhood cancer. That’s why at least 10% of every sale will be donated to CureSearch to support research to find a cure." (from Brady Bands website) 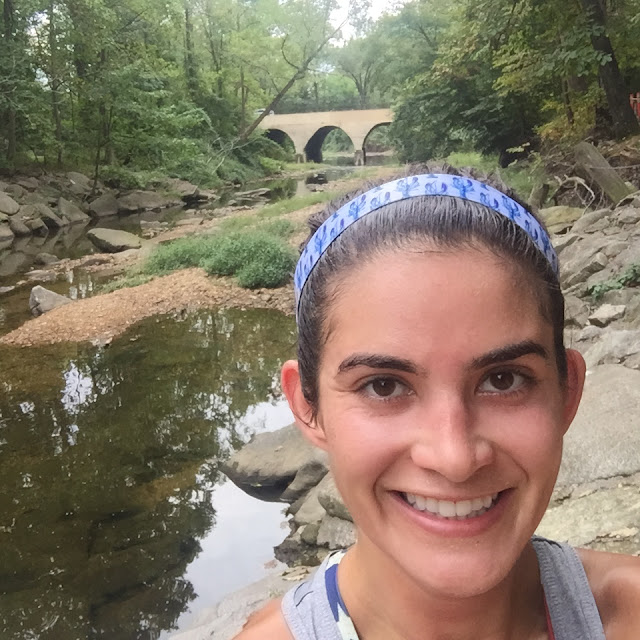 I made it back to my hotel room and tried to take a cute photo like Runs4PRs Instagram account, but failed. I've got to ask that girl what she's using to get that consistent angle. 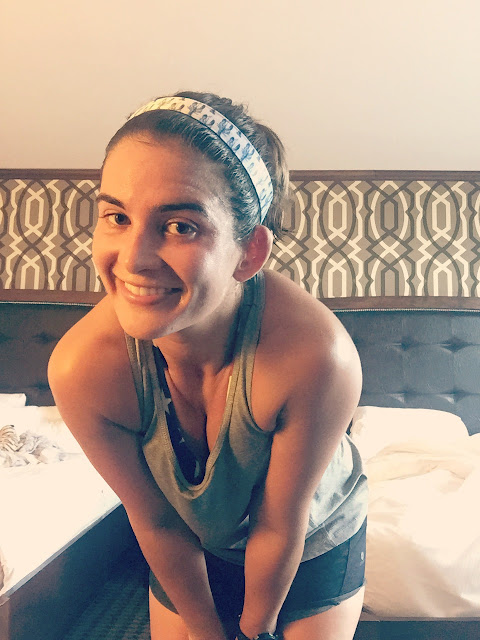 I took this photo before my run but tagged it up after. I hadn't intended to wear a shirt because I don't really ever wear a shirt to workout anymore, but I decided that I might see one of my grant officers in the lobby and it was probably best that I wore some clothes. I didn't but I'm glad I put a shirt on because I got enough creepy men honking at me as it was. What do they think is going to happen? Am I going to be so flattered that a complete stranger pressed on his horn that I am going to fling open the passenger door and throw myself at him? If you honk at runners or bikers of any gender, just stop. 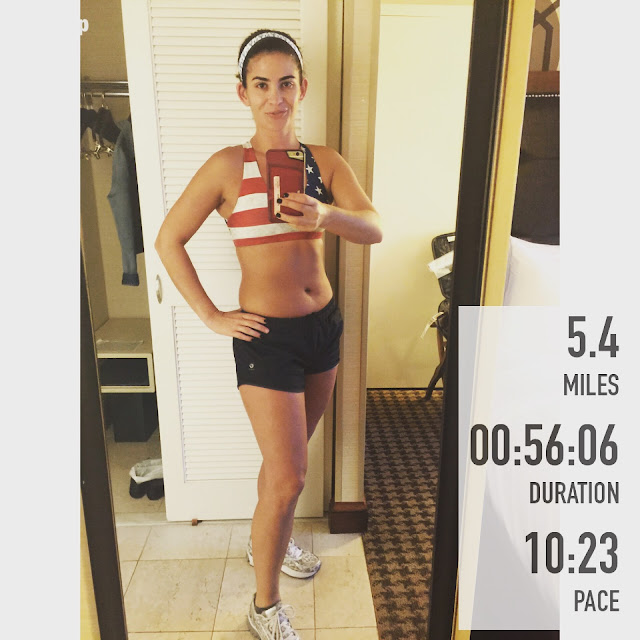 And I really appreciate everyone who commented nice things on this photo on Instagram and Facebook. It made my day because I've been feeling fluffy and out of shape lately. Love you, mean it.
at 10/05/2016 10:22:00 AM