Tripp Doherty's studio cycling classes are one hour of inspirational anecdotes, great music, and high fives. Tripp's shirt today said ☮ ♥ DISCO, and this pretty much sums up the magical hour with the addition of classic rock, current rock, techno, and Lady Gaga. I went to a few of Tripp's classes in 2007 when he was just added to the Roslyn Equinox schedule. I liked his style but I returned back to college and that was that.

Last Monday I attended one of Tripp's classes at the Great Neck Equinox and I was hooked. I was having kind of a crummy day, not because it was Valentine's Day even though it was, and I wanted to just go home and eat crap in front of the television. Somehow I convinced myself to go workout, and it was the best workout I've had in a long time. I just felt awesome in the studio and for the rest of the night. I burned 722 calories in that hour! When Mumford & Sons "The Cave" came on I wasn't sure if I was sweating, crying, or close to dying but I knew I was thankful that I could get my body to do that when some people are bedridden. I don't know how Tripp does this, but he gets you to be grateful that your legs and lungs are on fire. 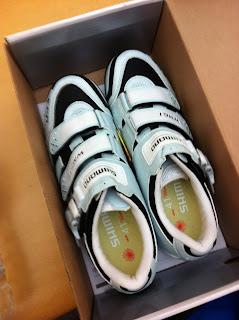 I have been bitten by the studio cycling bug (and I saved a ton of money this weekend when I was too sick to go anywhere or do anything) so I treated myself to these beautiful shoes.

These are the Shimano SH-WM61 Mountain Bike shoe and they are hot. They are black, white, and a light glacial blue. I have been planning many workout outfits around them. I'm not sure if I was more distracted by the hotness of my new shoes today, or the hotness of the Equinox sales rep moving the erg machine during class. Apparently the supergoodlooking employees work at Woodbury. Who knew?

Woodbury has gone under a major renovation since last summer. It went from being the underappreciated step-child of Long Island Equinoxes, to quite the spiffy gym. There is a new cycling studio, a more user-friendly floor space, and new showers. I'm not into long showers but I must've stayed in there for nearly twenty minutes. The water pressure was pretty heavenly.
at 2/22/2011 01:24:00 PM