My missed call log tells me I went to bed sometime around 12:43am... with my contacts in and in my clothes. I woke up around 4 and tried to remedy that situation. At 6:40am I got out of bed and realized I was making rice and Ezekiel English muffins in the middle of the night. I shoved my contacts back into my eyes and got dressed. Then the nicest thing happened - this boy that I kind of like called me at 6:57am on a Saturday to make sure that I got my drunk ass out of bed for my race. Who does that? Oh wait, that's something I would do. #finallyappreciated?

Today's Mini 10K started on the westside of Central Park. No me gusta. Despite this annoying inconvenience, the 40th Mini 10K rocked. I'm not normally into girl power, or any of that nonsense, but I was pretty damn proud to be running with those women today. It was a feel good race... except I didn't feel so good. I'm actually kind of embarrassed to admit how much I had to drink last night. By my calculations, I had 1 bloody mary, 4 vodka martinis (not allowed to drink gin anymore - I get violent),  3 vodka sodas, and 3 Thayers (vodka soda with pineapple juice). I have absolutely no idea if I had any shots, but I bet I did simply because that seems like something I would do. Despite all my drunken midnight cooking, I skipped breakfast because I was sure I would boot if I ate anything.
I finished in just under 50 minutes. I wanted a bagel so badly; I would've done anything to get to that finish line. Today was the first day I tried to run a race with music. I dropped my phone and had to dive down around runners to get it back. Never doing that again. 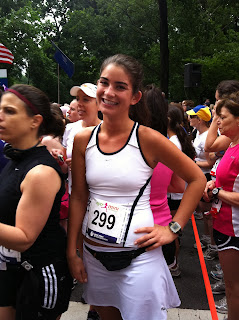 When I got home I found two bags of popcorn and a package of Tate's cookies sitting on my kitchen table. Why was I cooking if I purchased this? Where is my credit card? Why can't I be civilized before NYC races?
at 6/11/2011 10:37:00 AM