I was incredibly psyched to score a bike for Tripp Doherty's 9:45 AM studio cycling class at Roslyn. Working out with Tripp is incredible because he motivates you to push yourself past your comfort zone, and even past anything you can imagine you can do. With anyone else I'm tired after thirty minutes of spinning, but with Tripp I can find the energy to sprint at 8 out of 10 throughout the hour.

I love Tripp's classes because he creates a room where everyone is working towards being better and stronger. Today Tripp told us about a classmate (he didn't name him/her) who had heard about how people were paying off Target lay-aways for strangers and decided to do the same. Anonymous acts of kindness get to me, and I think that paying for a stranger's Christmas gifts without asking for recognition is testament to the goodness of people.

I wore my C9 by Champion for Target capri pants to Tripp's class. I got these pants at the C9 by Champion for Target event at Flywheel for free. I can't figure out which pair they are from the Target website, but if/when I do, I'll let you know. These capris are flattering (even if this picture doesn't do them justice) and they fit nicely. The have a drawstring at the waist but I never tie it. I normally cannot stand to wear pants when working out indoors, but I have gone spinning twice in these and they are unobtrusive. 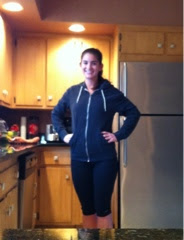 I downloaded this photo app for my phone called 7.0 MPX because I wanted a timer for my camera. I think these pictures came out badly. Do they look as crappy on your computer as they do on mine? I was also running late and couldn't figure out a good surface to prop up my phone. That's how much I wanted you to see my capri pants. I made myself late for class and posted unflattering photos of myself on the Internet.

I ran a bunch of errands today, including the grocery store. Stop and Shop is having a sale on frozen, steam-in-the-bag edamame. I popped a bag in the microwave and then seasoned them with Goya vegetable seasoning. Awesome afternoon snack.

I used to bring Goya in my bag with my everywhere. I lived in a dorm for seven years of my life - lots of access to salad bars. This delicious yellow seasoning can be found in most supermarkets now. I highly recommend you get some for yourself. 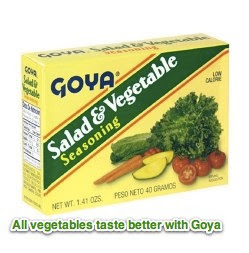