My alarm went off for the Ted Corbitt 15K at 6:25 AM and I just felt blah. I think that's happened to all of us, when we are supposed to get up for an important event, either for fitness or work or something personal, and we'd rather just ignore the alarm and stay in bed. I had to get up because not only was the Ted Corbitt my last race of 2011, but I also needed it as my ninth New York Road Runners race. Two of my races have been cancelled this year (the Bronx Half and the Poland Spring Kick-off) and I decided to use the credit for those races. I just don't feel right paying for a race, not being able to run it, and then getting a complete race on my record. I pay because I want to run... even when I don't end up wanting to run.

I made a peanut butter and honey sandwich on a slice of toast that I struggled to choke down. I ended up saving half to eat during the race. I then skidaddled up to 86th and caught the M86 bus. I am willing to jog to the park OR up to the hundreds, but not both.

I had a lot of trouble deciding what to wear for this race because I had never raced in December. I wore a pair of running tights, the white long-sleeved seamless athletic tee C9 by Champion for Target gave me, a navy/light blue reversible L.L. Bean puffy vest I bought in high school, and a George Bush '88 pin. Obviously I was dressed to win. 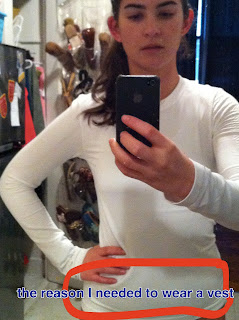 This is a photo of the shirt from the Target website. Um yeah. So, I definitely thought it was the compression shirt they also sell because it was pretty snug, (I requested small tops - my bad) but then I saw that the C9 logo is on the wrist and not the waist. That's a detail I particularly liked and noticed while I was running.
We all lined up and I realized that my red bib put me in the second wave. I could claim I'm getting faster (I'm not), but it's actually because fewer people sign up to run races in cold weather.

So I run the first loop (4 miles) and I'm questioning if taking up running more regularly has actually hindered my abilities. I'm missing my running partners and a little bored by the whole deal. Like I said, I was just feeling blah. But then I heard drumming and this made me think of the NYC Marathon. I was able to pick up the pace up the hill towards the hundreds. Thank you Mr. Drummer for raising my spirits. 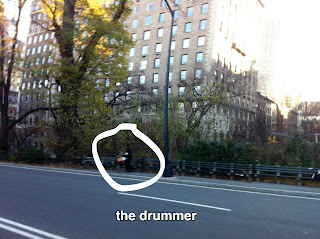 I've gotten pretty used to running with T and the Professor, or at least having them running the same courses as me. I missed them. I had no one to look out for and no pretty Professor's wife to bring me snacks. Instead I was forced to take photos of myself.

I made it through the race. I'm not ashamed of my time but I'm also not too psyched about it. My legs hurt and my back was achy, but I wasn't falling in the street or anything. I headed over to the 34 year-old's straight from the race. When I walked in I found the 34 year-old, fully dressed with shoes, asleep on the couch next to a bottle of vodka, with Cookie sitting on his chest. I immediately assumed they had been that way since the night before, promptly put her in her harness, and dragged her around the Upper Eastside for 45 minutes. Yeah, turns out that they hadn't fallen asleep on the couch after walking me home - they had been up at 6 AM going on a walk together and had both been exhausted afterwards. Oops. Sorry sweetheart - I don't mean to assume the worst.