A Trip Down Memory Lane

Today I didn't really feel up for running, but I know that just getting out there can change my attitude, so I put on my new Brooks Adrenaline GTS 11s and left the house. I ran through the town of Oyster Bay along South Street, which is where I encountered the first jackass of the day. I'm clipping along and this guy is signaling me to stop so I take out one of my headphones and he goes, "Slow down! I could give you a speeding ticket!" Really? Gag me. If this man is in law enforcement, we should be ashamed and frightened. Tell me he gets some kind of reduced salary for stupidity.

After some intense eye rolling (and I may or may not have called him a jackass), I hung a right on East Main Street. East Main Street turns into Cove Road. I haven't run on Cove Road since last winter, and it's a lot more pleasant without snow. I saw the Teddy Roosevelt Bird Sanctuary on my right, and thought it might make for a nice run. I was right. The TR Bird Sanctuary has nicely maintained, mulch-covered trails. I took off my headphones, enjoyed the sounds of nature, and got a little hill workout in. The people who work at the Sanctuary is very friendly, and I (figuratively) ran into staff members on my way out. We greeted one another, and then I set off back along Cove Road.


The further I ran, the better I felt, so I decided to turn today in to my long run day. This made sense because I have stuff to do tomorrow anyway. I saw Yellow Cote Road approaching and made a right onto it. The East Woods School is on Yellow Cote Road. I graduated from East Woods in 2001, and decided to see the tall building on top of the hill. I haven't run that driveway since a Turkey Trot in the late 90s, and it was still difficult. 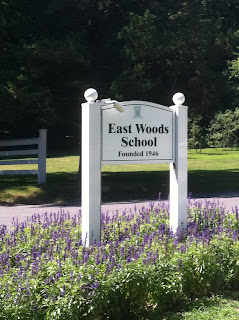 After reminiscing about the good olds days, and realizing that I looked like a creeper stalking small children at day camp, I headed back out. Forgive me forgetting about Discovery Camp. I went to the school for twelve years. Just because I am a sweaty mess in a sports bra and shorts doesn't mean I don't have every right to be there. Who sends their kids to Discovery Camp anyway? Now I had to get home, so I ran to 25A and headed west. The remaining 3.5 miles (give or take) of my run were filled with many jackasses. I have come to expect the men leaning out of gardening trucks to oggle me, but today reached a new low. And the Jackass of the Day Award goes to the guy in a G Wagon (honestly, who still drives those?) who drove into the breakdown lane and tried to play chicken with me.
at 7/15/2011 10:41:00 PM