Running Out the Happy Hour

Today my team had day 1 of a two day stepback. I believe "stepback" is newspeak for "time when team gathers to reflect on wins, losses, and lessons learned to inform future actions" or what everyone else calls a "meeting." Stepback apparently also means celebration so the company paid for us to eat Chinese food for lunch and then we collectively decided to enjoy margaritas after work (on our own dime because non-profits don't pay for alcohol - I am in the wrong industry.)

I've been on a roll with exercise, weight loss, and generally being awesome, so even though I hit up happy hour after work, I made myself leave after two margaritas and then go running when I got home as I had previously planned.

Because this was kind of a punishment run, I threw on what might be my least cute running outfit and decided to pound out 5 miles as quickly as I could. The heat plus the booze plus the wind were all obstacles that I forced myself to overcome. Forty-three minutes (and nine seconds) and 5 miles later, I was disgustingly sweaty and dead sober. I should copyright this as an official diet and exercise plan.


I paused that shit at exactly five miles and started to swagger strut home. Honestly, that is the only way I can describe the way that I walk. To add to the sheer audacity of my natural method of movement, I put on Robin Thicke's "Blurred Lines" and started shrieking singing along. When one runs the tipsy out, the subsequent feeling of delirium tends to mimic drunken behavior.

On a related note, I've realized that when I've been drinking my mannerisms begin to closely resemble the velociraptors in Jurassic Park.

Post run photos were mildly painful but the shower was magnificent. 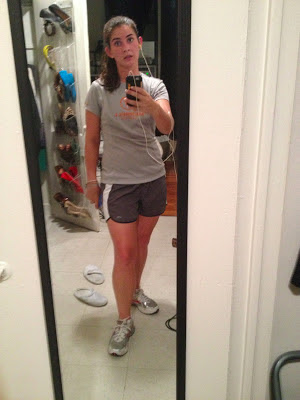 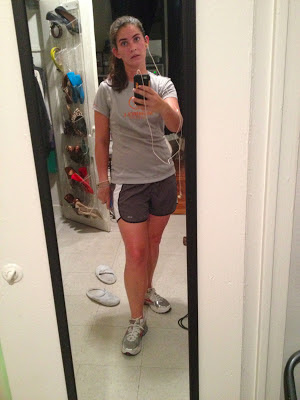