Hi friends! I'm back! I've found it pretty difficult to blog all summer. I've been struggling, and sometimes I hesitate to write about it because it feels like I'm airy dirty laundry. Work has been hard. I got an awesome promotion that recognized the hard work that I have been doing, including the additional responsibilities I've taken on since a colleague left in June 2016. But more money and a new title didn't add any hours to my week. I try to keep things in perspective but I broke down and cried on Tuesday. My team is so understaffed and my right-hand woman works remotely from Houston. Her house is destroyed by Hurricane Harvey. I am so thankful that she and her family are safe, but she's offline for the foreseeable future. That's 25 hours of work a week that's back on me. I'm trying to get temps in but that's a whole extra level of stress when I work remotely from Atlanta and the temp agency is in New York.

The travel is killing my personal budget because I'm spending so much money on dog boarding. I don't want to go anywhere for personal travel when I rarely get to enjoy a day off in Atlanta. That being said, I just got back from some trips that were pretty great. I had a really great birthday in Charleston. My Mikes planned me the best weekend where we ate all the food and drank all of the rosé. I got to see the eclipse in totality and a special someone threw me the best space themed birthday party.

CrossFit is Better with Friends

The most magical thing happened last week! My friend Erin was in Atlanta and she dropped in at CrossFit Identity. Erin and I went to college together, but we didn't know each other well. Years after we graduated, we both got into CrossFit and rescue dogs and started chatting about our shared interests on Facebook. Erin and her husband are fantastic dog parents. Their dog Chance is the coolest, and he has been a wonderful foster brother to TWENTY-SEVEN foster dogs. I am so thrilled that I got to spend some time with Erin in-person at the box. She's super strong by the way. 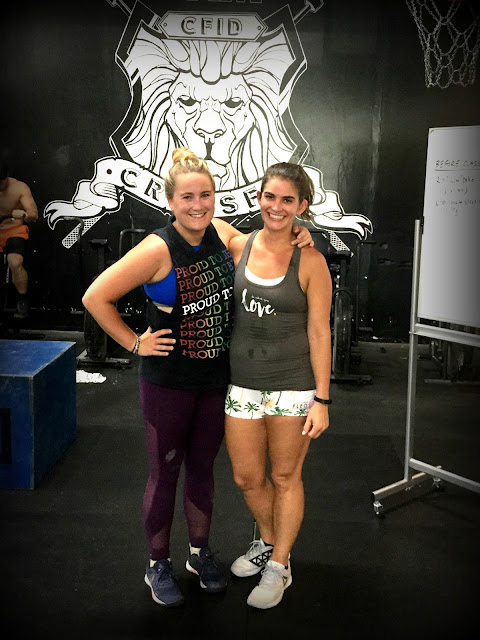 To make the day even better, my brand new Endless Summer by Nikki Leonard Fleo shorts arrived! These babies are the 3.25 contour, which have become my favorite Fleo short style. Just long enough to minimize chafing during runs, but still short enough to be cute, sassy, and #teamnopants. 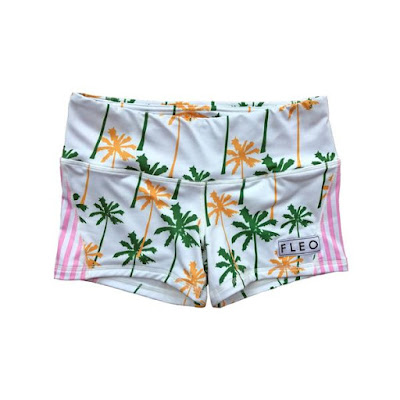 We retested a workout that most people dislike but I kind of secretly love. You pick a heavy odd object and run 1,000 m around the loop. Our gym is located on this random street that has everything from psychologist offices to a tech incubator to 3 different yoga studios to a framing place run by veterans plus a nature preserve. The run route is a mix of parking lot, gravel, and mulch trail. On June 13, I used a 50# dumbbell and finished in 9:32. On August, I used a 50# dumbbell and finished in 8:35. Progress folks.

I used to work with a nutrition coach. I think working one-on-one with a coach is helpful, especially when you are new to flexible dieting and need someone to prescribe you some macros. My biggest frustration with coaching was that I didn't feel accountable. I either hit my macros each day or I didn't. The most important part of any diet is consistency and so most of the time I didn't have much to say during my check-ins. By the end I was getting frustrated because it felt like I was becoming a guinea pig for things she learned about, such as carb-cycling. I got this email about intermittent fasting and carb-cycling the first week of the 2016 CrossFit Open. The last thing I wanted to do before 5 weeks of competition was fuck around with my carbs. Ultimately, I decided to part ways with my nutrition coach because she started posting about "upleveling her business," which I think means she automated most of her content. My best advice to internet entrepreneurs is to avoid sending emails to your current clients about how you changed your program so that it can be mass-produced, ultimately undermining the very product your clients originally purchased.

Anyway, I kicked around the idea of getting a new coach. I tried to map out my own reverse diet and freaked out because I felt I was getting fat. I was researching coaches because of this freak out when I happened to listen to a podcast with Layne Norton, PhD, aka Biolayne. He talked about his company Avatar Nutrition and the cost of $10 a month seemed more than reasonable. About a month later, I signed up.

For the first time since I started tracking food (back in 2009), I feel like I have a system of being accountable because I weigh in each week AND I have to check a box saying if I was compliant or non-compliant with my macros during that week. I wasn't compliant for the first three weeks of using AN, and then I started feeling pretty dumb about that. I'm really good at weighing and tracking food. I'm really good at eyeballing portions. Why did I keep saying fuck it and ruining my progress? Well, I had gotten myself into a habit of just moving on to the next day. And if you have more fuck it days than compliant days, you're not moving towards your goals.