I love compression sleeves because I get cankles. Yes, cankles. You should feel sorry for me.

I recently went on a business trip to Chicago (my super cool new job includes travel!) and I conked out on the plane before putting on my compression calve sleeves. I was suffering from a 3-day-in-the-making hangover and just really wanted to go to sleep. Upon landing, my ankles were the same size as my calves and I was horrified. I slept in my ankle sleeves that evening and thankfully my ankles returned to almost normal size.

I was not going to make the same mistake on the way home. I put those suckers on immediately after boarding and kept them on until I arrived safely at my apartment. 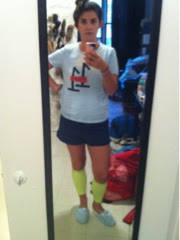 I actually really like sleeping in my compression sleeves and did so again last night. Please excuse the copious amount of laundry in the picture about. I haven't been to my parents house in a while.

I wear Zensah Running Compression Leg Sleeves, but other companies make similar items. I really want the American flag print.
at 8/31/2012 09:04:00 AM No comments:

It's been one of those weeks. On Monday I was dying from the world's worst residual hangover. Tuesday was the birthday from hell. And I arrived at work at 6:15 AM. Wednesday was just kind of crappy. But yesterday, Thursday, this day takes the cake.

He who shall not be named but broke my heart was in my office. Yes, my new office. My safe haven of fun and hard work. So what if he was invited to a conference? This is my home turf. I spotted him early in the morning after a visit to tech for a new desk phone. Thankfully my short(er) stature allowed me to duck behind the chutes and escape to elevator safety.

I enlisted the help of my office friends to keep tabs on him and report sightings through email. I imagine this is what it felt like to be hiding from the velociraptors in the laboratory/kitchen in Jurassic Park. I seriously sent an email asking if the coast was clear because I had to pee.

He hadn't been sighted in a while and so I thought it was safe to approach the front desk. I was actually offering my services to cover the front desk, and then I saw him. And I ended up speaking with him. And I didn't die. And I didn't try to kill him (luckily there was a large desk in between us...) And I didn't start crying hysterically or asking what I did wrong. And I didn't go to a bar after work. This ladies and gentlemen, is what we call progress.

I did go to Power Vinyasa Yoga at the Equinox at 63rd & Lex and then I did die. Twice. I accidentally brought running shorts instead of spandex and my ingenious idea to wear a long-sleeved C9 compression shirt turned a regular yoga class into freakin Bikram. Iyala Berley doesn't eff around.

I didn't realize how out of shape I have gotten this summer. I had been going to yoga (kind of) regularly this spring so I kind of assumed I'd still be able to move in a somewhat fluid motion. Nope. Not true. I was a sweaty mess rolling around on a sopping wet mat. I kind of liked it.
This yoga class starts at 7 PM and lasts until 8:15 PM, and by 8:15, I mean 8:20. I didn't get home until after 9, and at that point I didn't feel like eating dinner. My new manager and I have discussed the importance of exercise in my class so I'm going to have to figure out a better eating schedule. Any suggestions?
at 8/24/2012 09:02:00 AM No comments:

I'm not a huge fan of sunscreen but I recently started wearing it again. Now that I'm not regularly tanning in a tanning bed but spending more time outside, I have found that I can get a little red. I don't really burn, but no one wants to be uncomfortable, or worse, peel.

As you know, I'm pretty active. I need a sunscreen that won't melt, but my skin is easily irritated by those sport sunscreens. There's a few on the market that actually give me hives. Usually the term water-proof turns out to mean painful burning sensation once it touches my skin.

I highly recommend Publix sunscreen lotion (yes, the Florida supermarket chain). It's label says it's moisturizing, very water resistant, and provides UVB protection. I have a bottle of SPF 15, but it is available in a wide spectrum of protection. If you live in the Florida area and you'd be willing to send some to me, I'd love you forever. 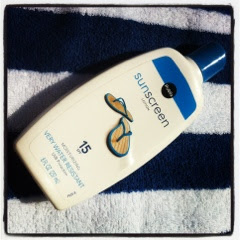