My Passions are So-Called Cults

The two things I love the most, Teach For America and CrossFit, are often accused of being cults. Apparently I like the taste of Kool-Aid.

I am a Teach For America alumna from the 2008 New York City corps. I am a member of CrossFit Hell's Kitchen. I could not be prouder to call myself these things.

The similarities and differences between Teach For America and CrossFit are the reasons I find each so essential to who I am. I've been with TFA for the past six years, ever since I graduated from college. I only recently joined the CrossFit community, June 2013, but I already cannot imagine my life without it, nor would I want to. This post is not a response to criticisms of either organization, nor is it an attempt to connect the education non-profit to the fitness company outside of my own experiences. I am a Teach For America alumna and a current Teach For America staff member who CrossFits and because this is my blog, this post is about me.

There are days where the magnitude of my job scares me. If I fuck up, there are actual and serious consequences that will have an impact on teachers and students. It is removed enough from the classroom where I no longer feel control over student outcomes and yet I feel a deep sense of responsibility to ensure that the students in the schools that we serve are receiving the best possible opportunities because they deserve them. I am deeply committed to Teach For America's mission and my sense of urgency is high. And sometimes I get myself so upset about educational inequity that I feel entirely helpless and about to lose my shit. CrossFit grounds me and proves to me that hard work, ambitious goals, and a plan leads to results.

The FitBit Hates on CrossFit

I love my FitBit Flex. It's probably my favorite accessory and I've got an Hermes bracelet so that's saying something. (Yup, I went there.) I wear it everyday and it is a consistent reminder to get my ass moving. If I need to go down to the Tech Shack, I'm walking the 7 floors, even if I'm in heels. If I want my 44 oz iced coffee from the East Norwich Deli - whelp, time for a stroll outside. I really like seeing those little lights light up.

The FitBit is an accelerometer, which means it measures acceleration and that means it does its thing best when you are moving forward. This is great if you're into running, less so if you're on a spin bike. FitBit uses algorithms to approximate calories burned based on your movement, and they do a pretty solid job of using feedback data to update their algorithms, but since it is not a heart rate monitor, it isn't very accurate at calculating calories burned from other forms of exercise.


This leads me to stand behind my statement that FitBit hates on CrossFit.

"You earn 'very active minutes' when you wear your Fitbit while doing cardio workouts and high-intensity activities like jogging and running. Note that your active minute count will be lower for activities that are not primarily step-based, such as weight lifting, cycling, and rowing."

I'm pretty sure CrossFit is the definition of high-intensity activity.

Now let's take a look at my FitBit dashboard for April 15, 2014. I had 3 Very Active Minutes and you know what the WOD was? ONE HUNDRED FRICKIN BURPEES FOR TIME. It took me over 10 minutes. Where are my other seven very active minutes?! 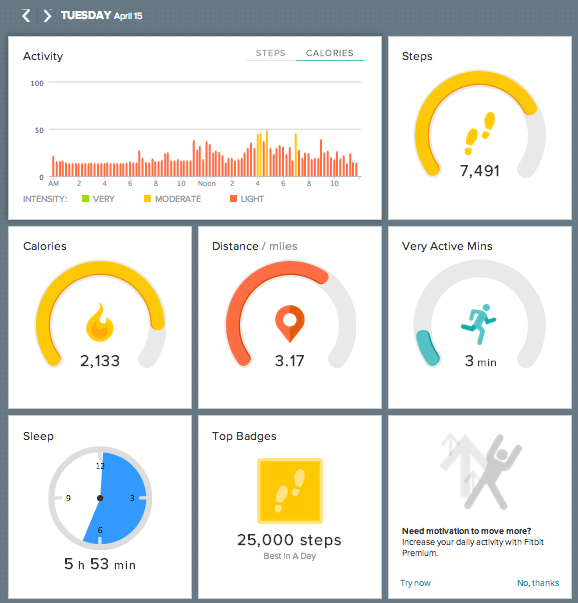 It doesn't matter how hard you work or what barriers you break - if there is no running in the WOD, be prepared to be told that you lay prostrate on the floor eating macaroons all afternoon. You can override the thing and input your own exercise but there's no CrossFit option. The generally accepted substitute on MyFitnessPal is Circuit Training but I don't bother to change it. Normally I'd advise you to wear your HRM to get an idea of calories burned during a certain activity but since no day at CrossFit is exactly alike, that's not going to provide you an accurate number.

My best advice is to remember that the FitBit is not supposed to provide you with an accurate number of calories burned but should rather be used as a motivational tool. It's really hard to justify taking the elevator when it's midday and you're only on your second light.

CrossFit Verve and a Hike

I was in Denver earlier this month and made it to CrossFit Verve, co-owned by Games Athlete Matt Chan. Fun fact: the first CrossFit Games I watched was in 2012 and I was rooting for Matt Chan even though I really didn't know much about the sport and had no idea who he is. He came in second, but from then on he's been my guy.

I walked over from my hotel downtown, which is about 2 miles. Ignore your GPS and take Blake or Market Street. A lot more scenic and a lot less populated by drug addicts. You're welcome. I made sure I left with plenty of time because I like to get to boxes early to get the lay of the land.

Coaches Eric and Colby had us do a group warm-up and then we got to choose if we wanted to work on box jump technique or muscle-ups and split up. I went with the box jumps and maxed out at 32 inches. We sat on one box to jump on the other and it was cool how it forced me to use my hips to jump up rather than launch my body at an angle and over.
Read more »
at 5/22/2014 08:43:00 AM No comments:

I don't recommend it.

After my midday track workout yesterday, I went back to work for the rest of the afternoon. Then I asked my mom to drop be off at CrossFit Central LI because my car was still in the shop. We had a bench press deload week followed by a nice 21-15-9 couplet. 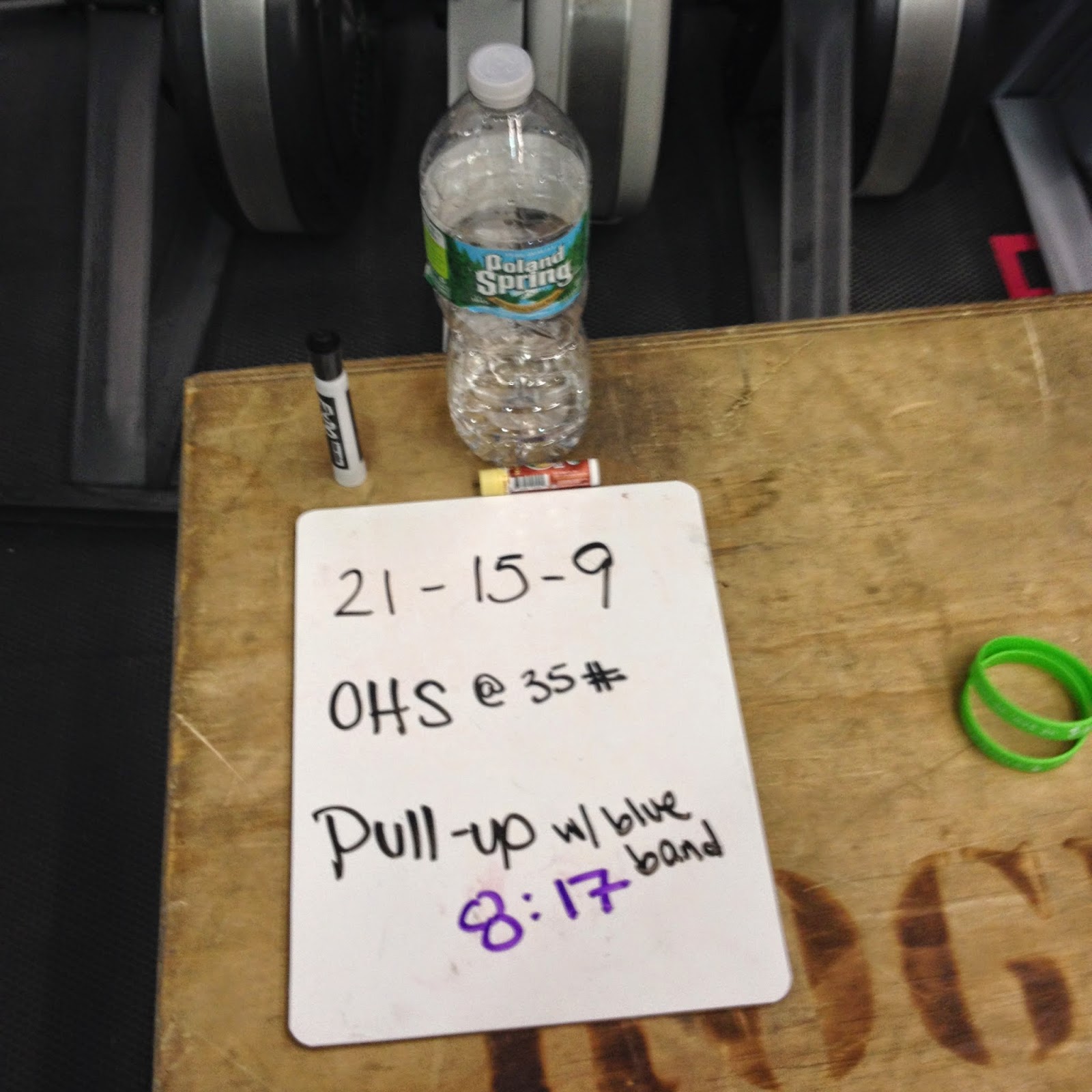 My overhead squat is still pretty light. Back at Frostbite 2014, I PR'd with a 65# OHS and I was able to get 4 unbroken at that weight, barely. I managed 35# (15# training bar and 2 tens) but I certainly wasn't going unbroken. 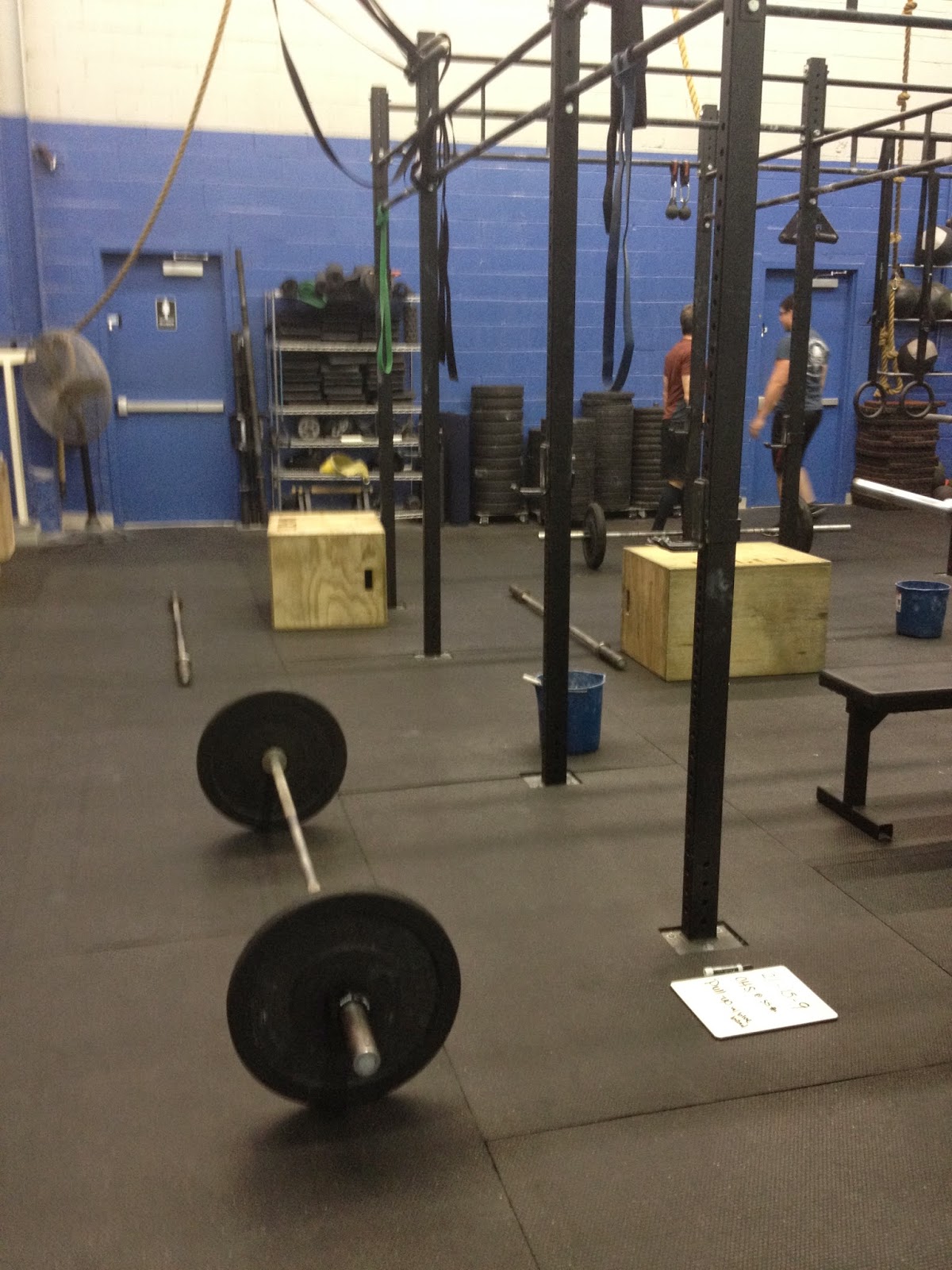 When I woke up from my nose surgery, I thought I had been buried alive. My eyes were covered, my nostrils were packed, and they had wrapped me in so many blankets that my mouth was blocked and I was swaddled like a newborn infant. Realizing I was trapped, I let out a bloodcurdling scream that sounded more like a small animal drowning. The subsequent panic attack resulted in a barely tolerable nurse loading up my IV with Xanax over the next four hours because I was apparently upsetting her and other patients. If I hadn't wanted to get out of there so badly, I would have shown her what it really looks like to upset other patients. I once watched my grandmother remove her own IV and beat a nurse with it. It was one of the most entertaining things I have ever seen and I seriously considered paying homage to the small yet vicious woman, may she rest in peace. 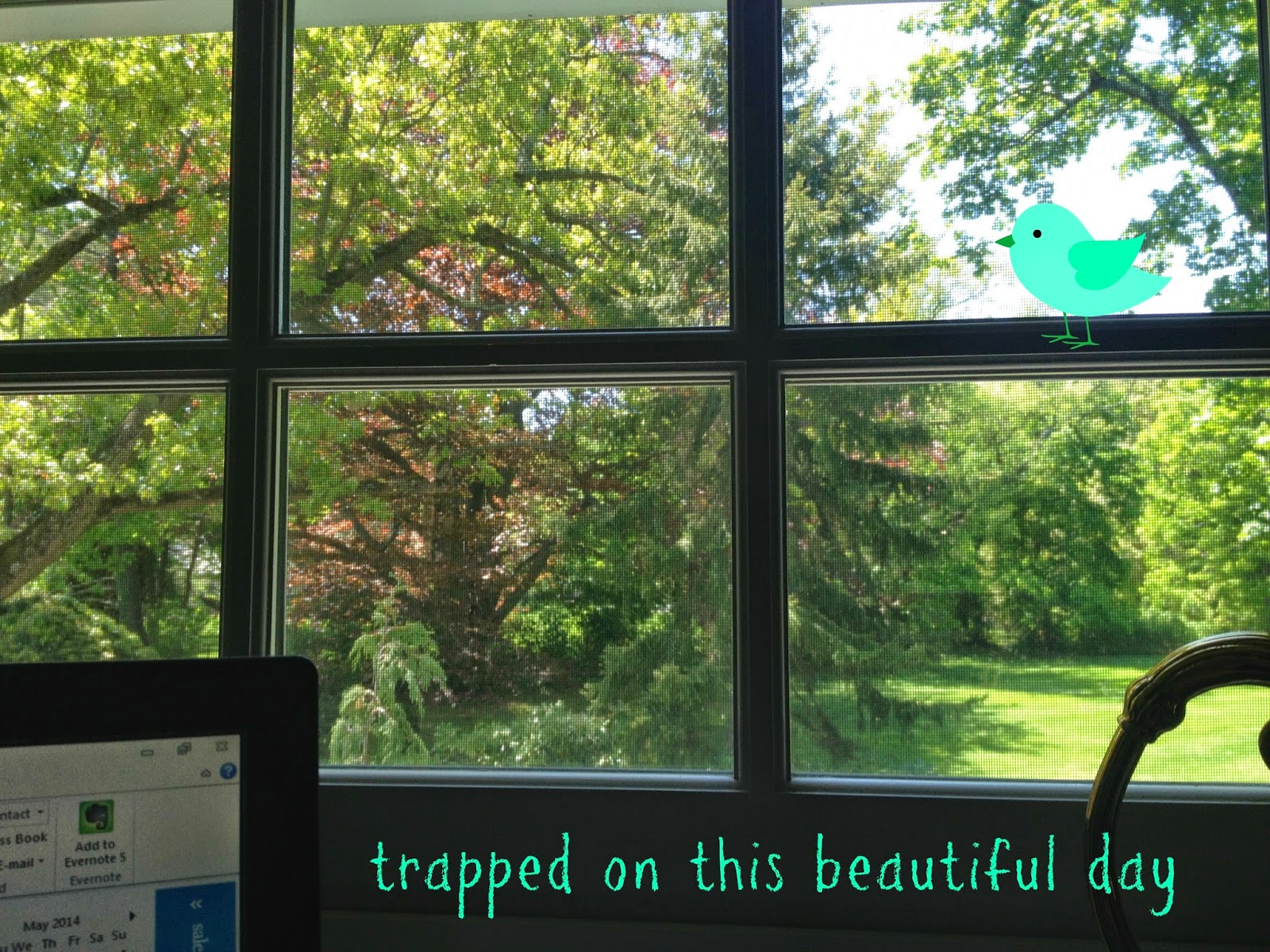 I don't do well with being trapped, figuratively or literally. I don't like small spaces, glass enclosures, revolving doors, or particularly long tunnels. I like to know how I am getting out of things. Maybe this is caused by my being trapped in revolving doors twice. Maybe knowing that everything would end on a neat timeline - high school, college, my corps commitment, school years, summer jobs - has made me crave a definitive end to everything. All I know is that I feel trapped and I have felt trapped in New York for too long. I can't wait to say goodbye to studio apartments, the subway, and crowded sidewalks. I am really looking forward to moving to Atlanta. I don't think that I am running away but I certainly see this as my escape. Get out, get moving, don't look back. 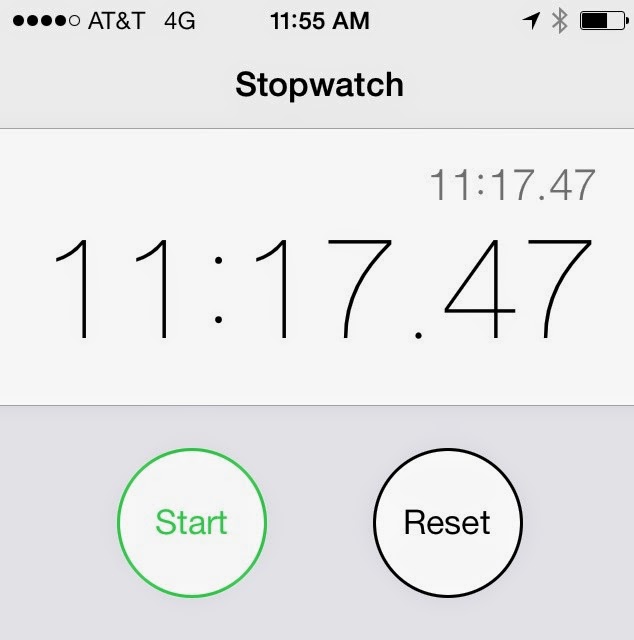 The Return of the Morning Run

My friend Matthew deserves a big thank you for motivating me to get out of bed this morning and run a 5K. He has recently committed to adding 3 days of running to his current routine and yesterday he invited me to join him for a run. I had already done the WOD, the extra work for the WOD, and I was about to get in the shower so I declined. But his commitment stuck with me and so this morning, even though I didn't really want to, I got up, put on my spandex and hit the pavement for 3.1 miles. 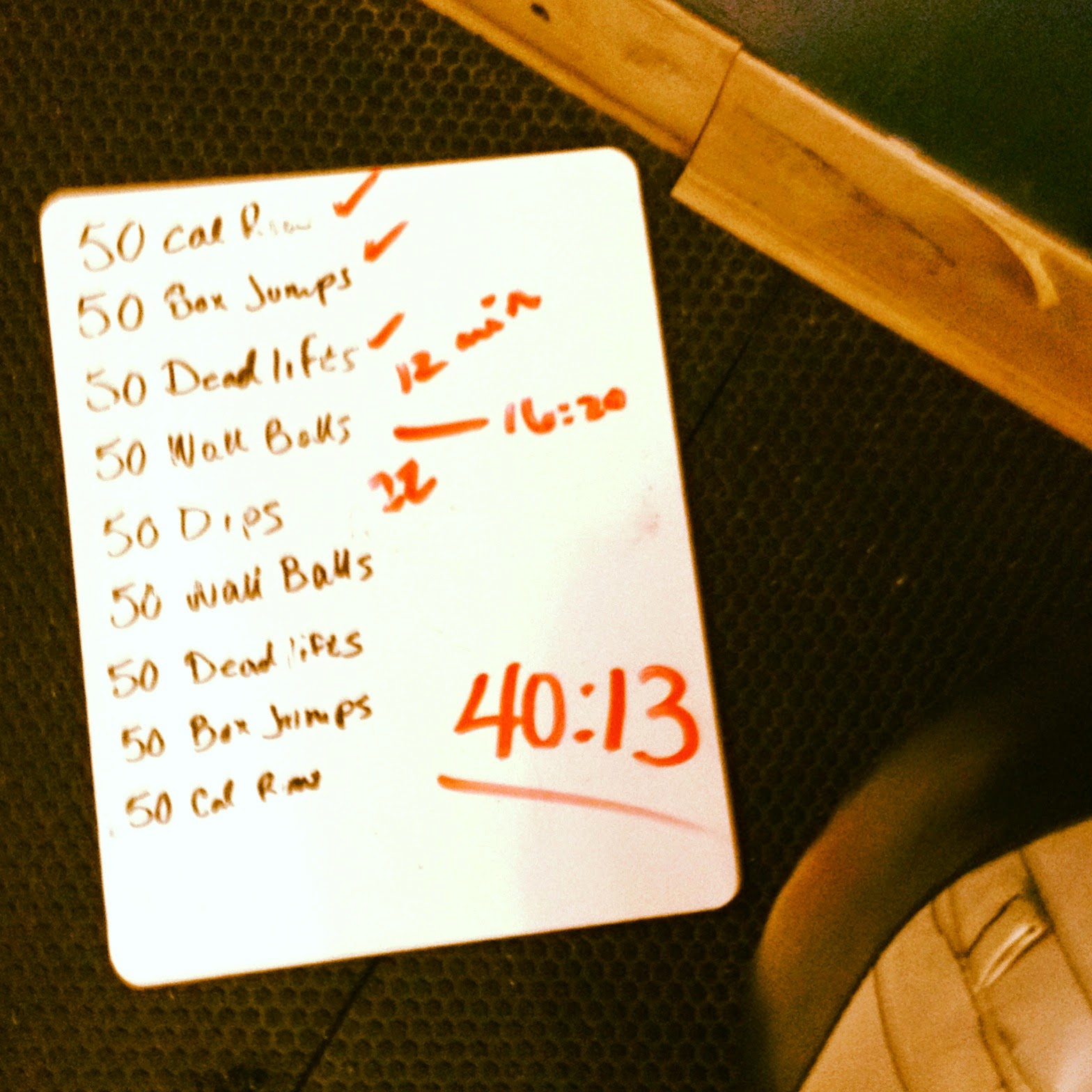 It was a tough workout. It was the first time I had done wallballs since my nose surgery and I think I might have gotten worse at them. Box jump overs are no joke after a row - my legs felt as if they were independent from the rest of my body. I did the workout Rx except for the ring dips. I don't have dips on my own yet so I used a thin green band on the dip horn (it's a lot less dirty than it sounds) but my goal for 2014 is to dips on the rings and the horn WITHOUT a band.

And yeah, ONE HUNDRED deadlifts at 125# has been my great accomplishment of the week thus far.

Today I did my first Spartan Race. The Colorado Military Sprint was held at Fort Carson, about an hour outside of Denver. It was a really well-organized event but it took a while to clear security and enter the race area. Oh, and it was absolutely beautiful.

Rachel and Tammy had planned on doing this event with their friends Scott and Andy. They all know each other from Equinox in New York. They now live in Denver. I'm pretty positive I took one of Scott's classes before he moved out here. Andy generously offered to drive us all out to Fort Carson.

After an incredible week at Exploring Leadership, I had Friday to explore the city by myself. Tammy and Rachel from CFHK have been on a cross-country road trip and didn't get in until last night. I visited the Clyfford Still Museum and had lunch at Cap City Tavern. I recommend the perfect little side salad with grilled chicken and a side of their garlic rosemary fries. 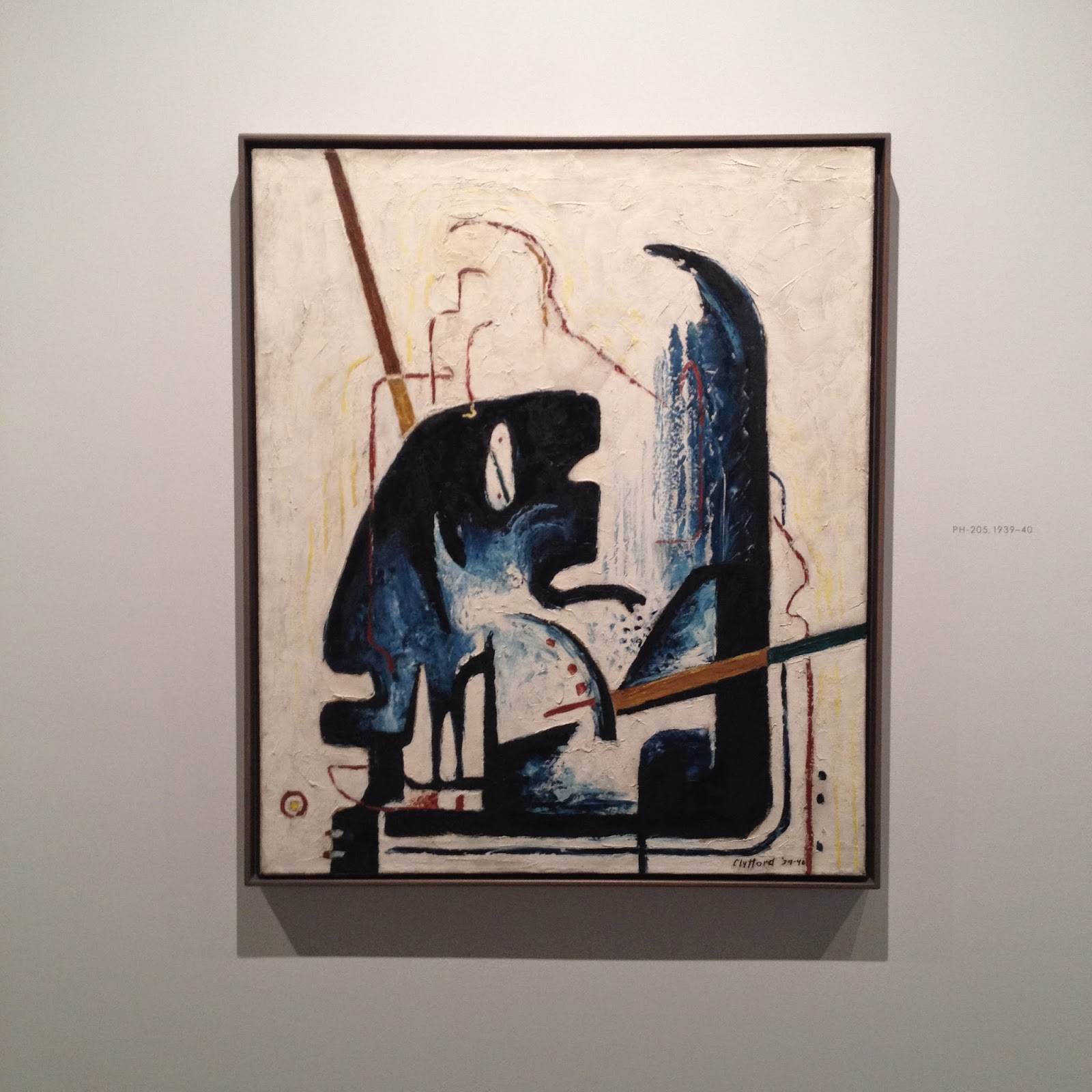 I had planned on going to CrossFit but it was absolutely gorgeous out and I decided to run instead. I wore my new favorite tank. 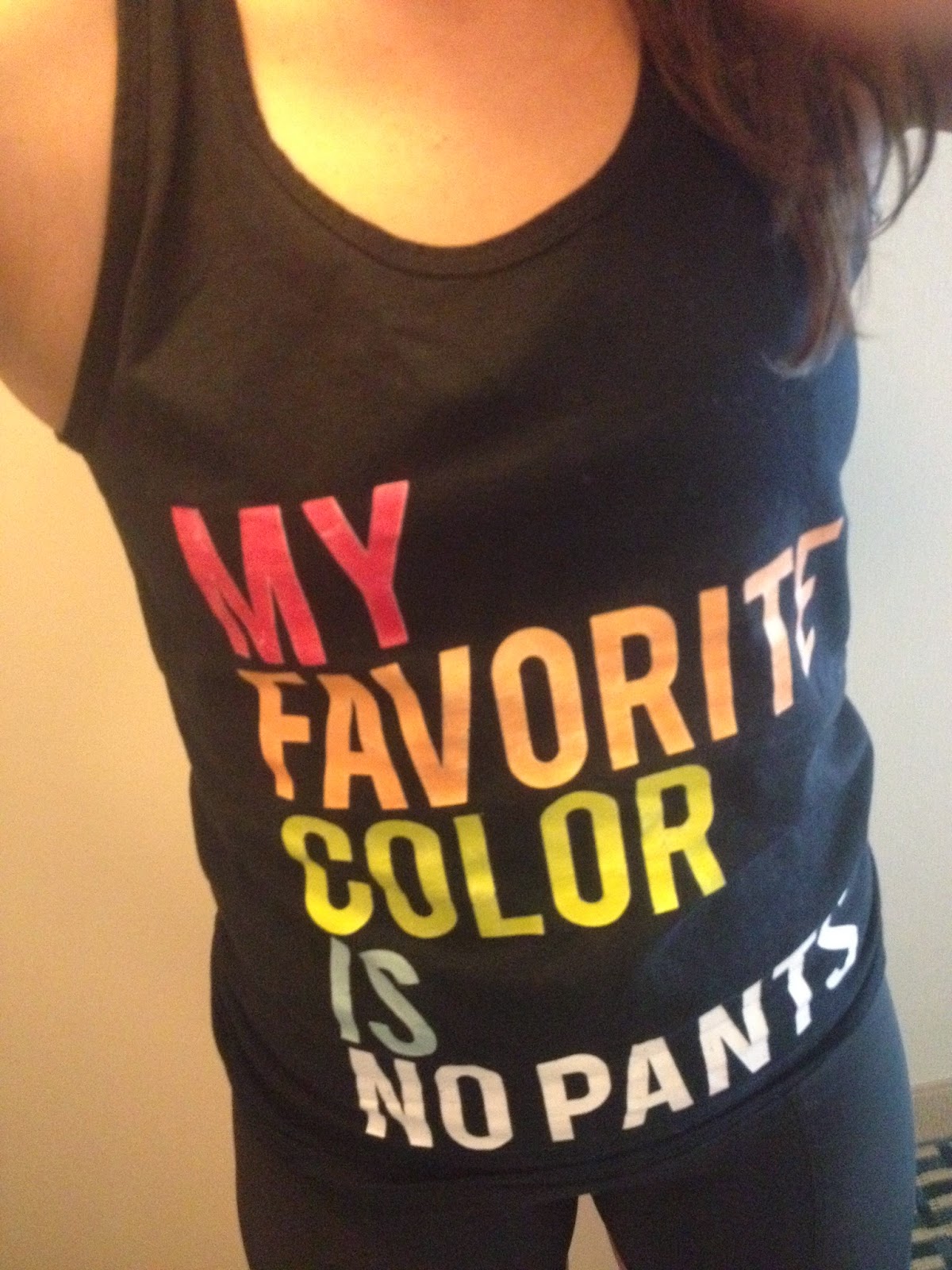