THE OPEN IS HERE!

What is the Open you ask? (I imagine I still have about 6 pre-2013 readers who faithfully check my posts hoping I've given up CrossFit. Sorry, not happening, but I'm happy to explain anything and everything CrossFit to you.) The Open is a worldwide 5 week tournament for anyone who wants to pay $20 and get judged doing the weekly workout. The workouts are announced on Thursday nights via live feed on the CrossFit Games website and then we all have until Monday to complete the workout and submit our scores. Last night I got to catch the tail end of Garrett Fisher going head to head with Marcus Hendren at CrossFit North Atlanta. Garrett's hair never moved. It was beautiful.

The wonderful folks at CrossFit Steeltown told me I was welcome to do the Open workout at their facility. I hadn't planned on doing 14.1 in Pittsburgh and didn't have enough clean workout gear with me so I made a stop at Target on the way. I bought a skort, and although adorable, it was a pain in the ass and I ended up tucking it into my waistband. I looked super hot, believe me. I arrived and learned that Dylan would be my judge. Erica, a new member, was also there and she killed a scaled version of 14.1. I am really impressed by her.

The clock is set, 3-2-1 GO. And I choke on my double-unders. After a few missed starts, I start stringing them along. I do my first set of power snatches as 8 and 7. And then I choked on my double-unders again. SPOILER: This happened every damn round. I split my power snatches into 5 unbroken with a 20 second rest as I had planned and just tried to keep moving. I was audibly telling myself to stop choking on the du's and to get my head in the game. With less than a minute on the clock, I was back to power snatches and cranked out 7. I locked my arms out on that last rep literally with one second on the clock.

I got 172 reps, which comes out to 3 rounds, 30 double-unders, and 7 power snatches. I know that I should feel good about this, but I don't. I have decided not to make a second attempt because I need to rest for my 50K on Sunday and I doubt I will be able to jump after it.

Dylan was a great judge. Thank you so much for spending 14.1 with me! 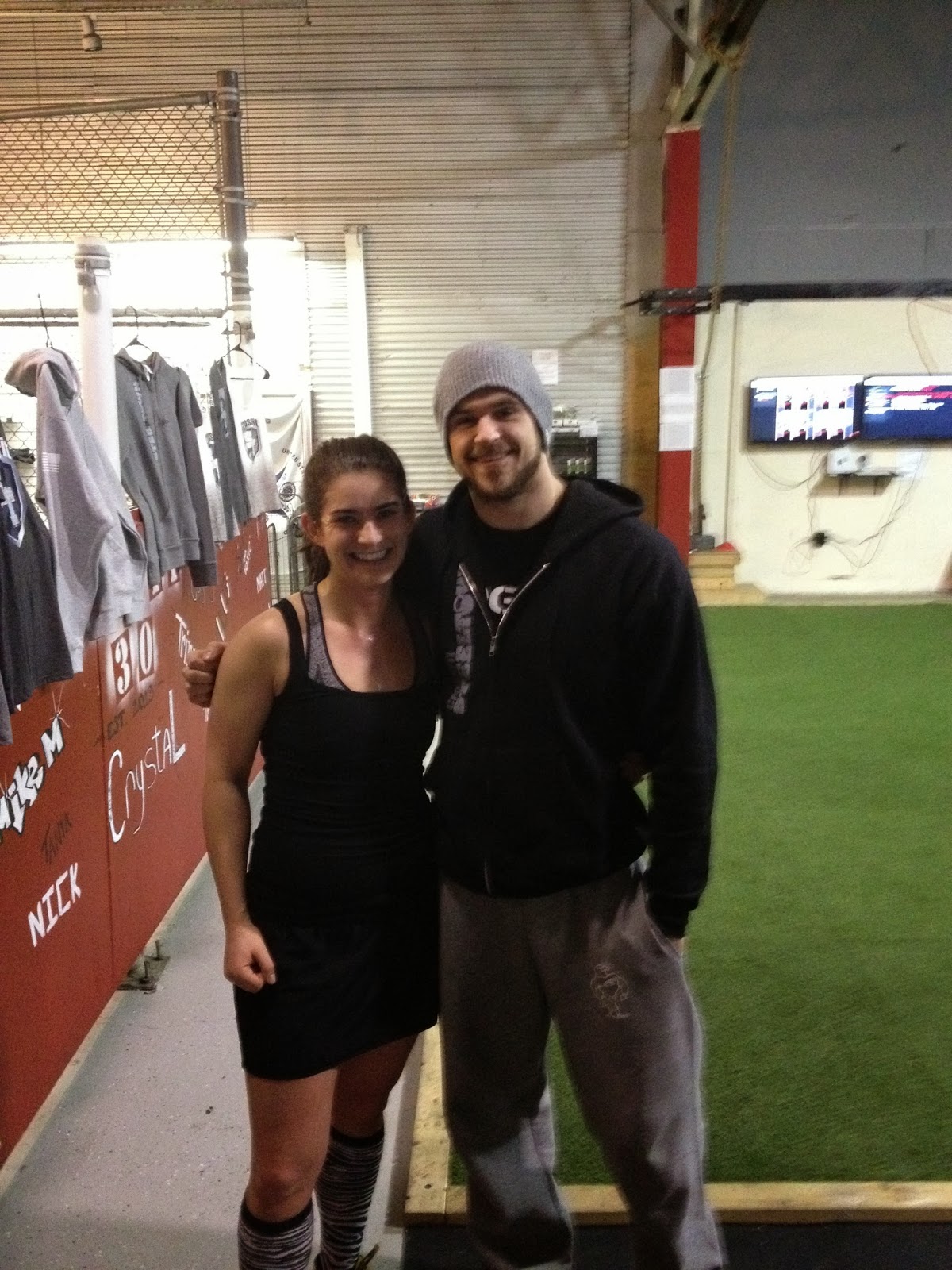 Throwback Thursday: Home on the Range

So I'm starting a new Throwback Thursday feature to make myself finish and share posts that I have started over the years and never finished. Get excited for some old pics and fun tales.

Throwback to the time my sister and I went to the shooting range. 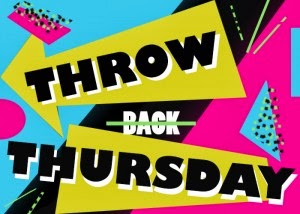 Another thing I learned in 2012 is how to shoot a rifle. Back in November, someone sent me a LivingSocial deal for a martini and oyster dinner. In the tiny bottom righthand corner was an offer for Dynamic Firearms Training's Shooting Range package. For $59, the package included rifle rental, ammunition, safety gear, and classroom and range training. Obviously I emailed my sister and told her we should go.

Neeni (my sister) scheduled our class for Sunday, December 30. Great way to finish out the year if you ask me. My sister schooled everyone and shot closest to the bulls eye at 25 yards. As her prize, she got to shoot an AK-47. 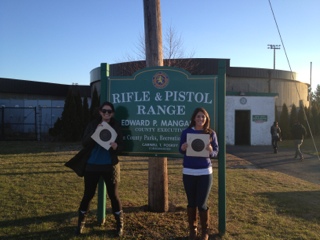 Today I flew to Pittsburgh for work. Once we landed, I picked up my rental car and drove to Target. Then I inhaled a French fry stuffed sandwich at Primanti Bros before heading over to the 4:30 PM WOD at CrossFit Steeltown. I had Googled them while sitting in the swanky Delta terminal at LGA, emailed them from Target, and Tommy, head coach and owner, emailed me back by the time I checked out with my bounty.

We all know I love dropping in at boxes when I am traveling. I get to meet great people and do something that I love with them. I used to like running in cities that I am visiting, but dropping in takes it to another level. And it's too cold to run outside in Pittsburgh right now. Actually, unless I go to CrossFit, I do not plan to leave my hotel until Friday because I am interviewing people in the hotel conference room's, there's a pretty good restaurant, and a legit by hotel standards gym. 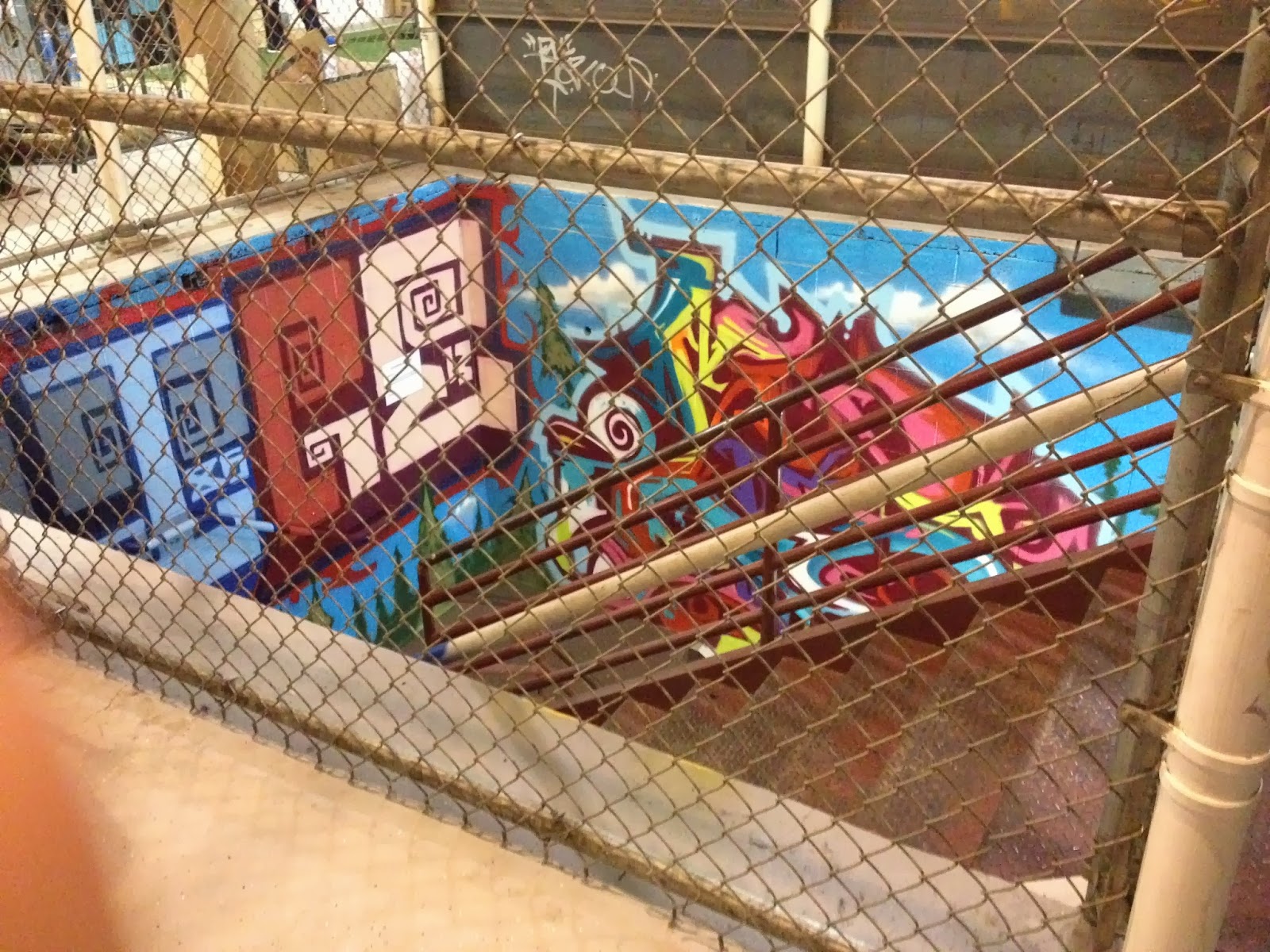 Today's workout was 487 meters on the rower. I think they play some under or over game but I got to 509 once I stopped pulling so I guess I lost? Then we learned about external rotation and worked on push-ups. After Frostbite's 20 push-up buy-in and AMDAP's partner clapping push-ups, I am all push-upped out. However, for about 5 reps, I think I finally did push-ups correctly because they felt entirely different and I think that's what Tommy was talking about.

Sunday Funday: AMDAP and Some Soul

Today was a jam packed Sunday Funday. I woke up at 7 AM to bright sunlight and was confused as to why my body felt like I had just run a marathon. Then I remembered that I had competed in the Frostbite 2014 the day before and decided to go to the grocery store because I had an overwhelming need to drink Paul Newman's Own. I ate white rice with Kerrygold butter, which is almost as blasphemous as eating in on toast, and I washed it down with half and half (lemonade/iced tea not cream/milk) in my bed. I didn't have anymore Young and the Restless episodes to watch so I was a little sad.

I got myself dressed and headed on over to Brick New York for CrossFit speed dating otherwise known as As Many Dates As Possible (AMDAP). There was a great turn out and we had a 48 minute WOD. We spent 45 seconds doing an exercise and then moved on to the next guy to perform the next exercise. We had air squats, synchronized lunges, wallball tosses, partner sit-ups with the med ball, KB swings, and junkyard dogs. There were some cute guys but I was just excited to spend time with my new best friend Janice, who goes to Dynamix and judged at Frostbite. Speaking of judges at Frostbite, I may or may not have been hitting on one at Frostbite and I was pretty happy to see him at AMDAP. I made sure he got my number before moving on down the line.

When Hell Freezes Over at Frostbite 2014

Team "When Hell Freezes Over" came in 9th place out of 21 scaled teams at Frostbit 2014. I love these guys and couldn't ask for better teammates!

Thank you to all the coaches at CFHK, especially to Anthony and Stephen for all the time you have spent working with me, and Danielle for being there today to encourage and sharing your expertise when I really needed it!

A very special thank you to Chad Syniec, an amazing CrossFit Central LI coach, who has welcomed me to Olympic Lifting Sunday and taught me so much about lifting, strength, and believing in my potential. I couldn't have made it through WODs 2 and 3 without you! 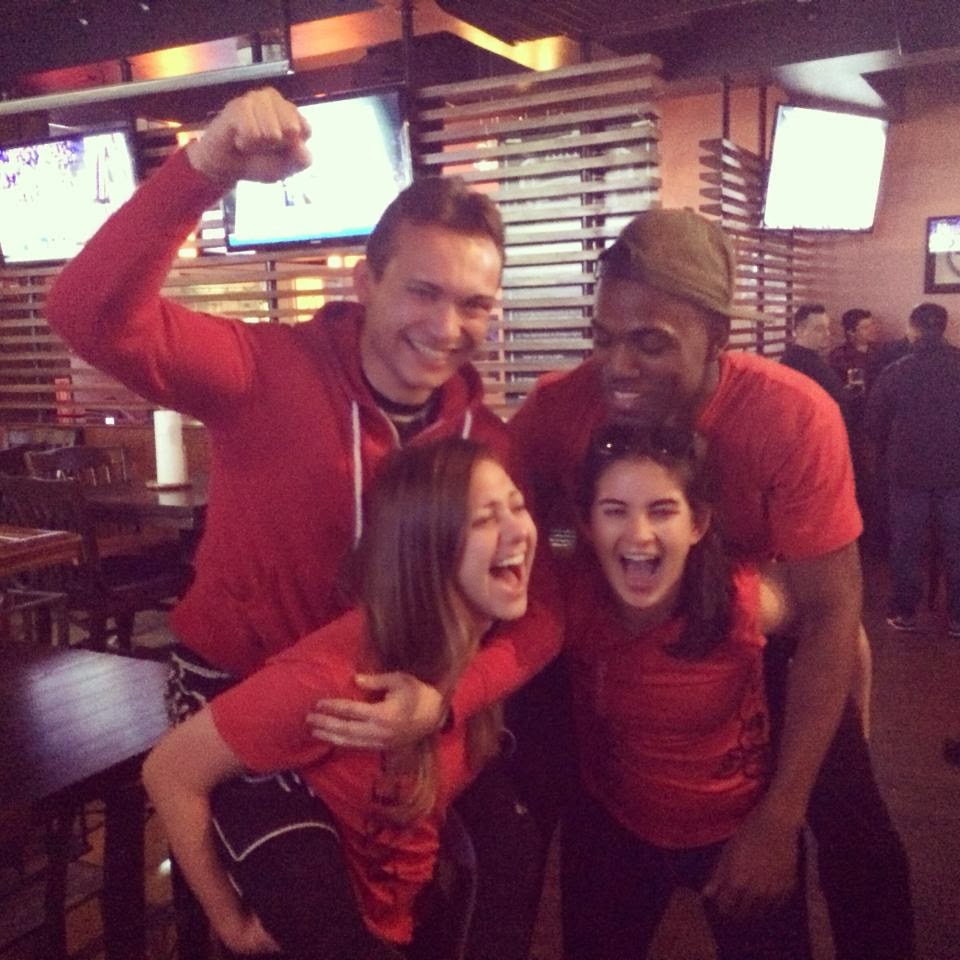 Tomorrow is my first CrossFit competition - Frostbite 2014. I am nervous, anxious, and extremely excited. My bag is packed, my outfit is laid out, and I ate an entire pint of ice cream. I hope I don't let my team down and deep down, I really hope we win the scaled division.

Dear CrossFit Gods,
Thank you for the weather forecast because this is going to be the toastiest Frostbite yet. Please help me to keep my head in the game and the passion I have for CrossFit in my heart. Aaaand, I'd be forever grateful if you could ensure that there's at least 6 photos where my ass looks great and I'm not making a stupid face.Sincerely,Alessandra Echeverria
and EVERYBODY knows that if you pray to the CrossFit Gods hard enough, Greg Glassman answers.

Wins and Weaknesses Within the Same WOD

There are days when I see wins and weaknesses within the same WOD, such as this morning at the 5:45 AM class at CrossFit Central LI. I get there just in time for the warm-up and I'm a little tired. Had some trouble falling asleep last night. I get through 50 jumping jacks and then I get the 50 double-unders UNBROKEN. This has never happened before and the highest I've ever strung together before was 31, so this is a definite win.

We gathered for a group stretch and I could feel that I have been ignoring mobility work. We had a 3 minute AMRAP of wallballs and I got 50. These were not unbroken but I didn't drop the ball and I only no-repped once. Again, this is a definite win.

I was really psyched for the metcon at Central LI today because I really thought I could Rx it and then I had my hubris handed to me. 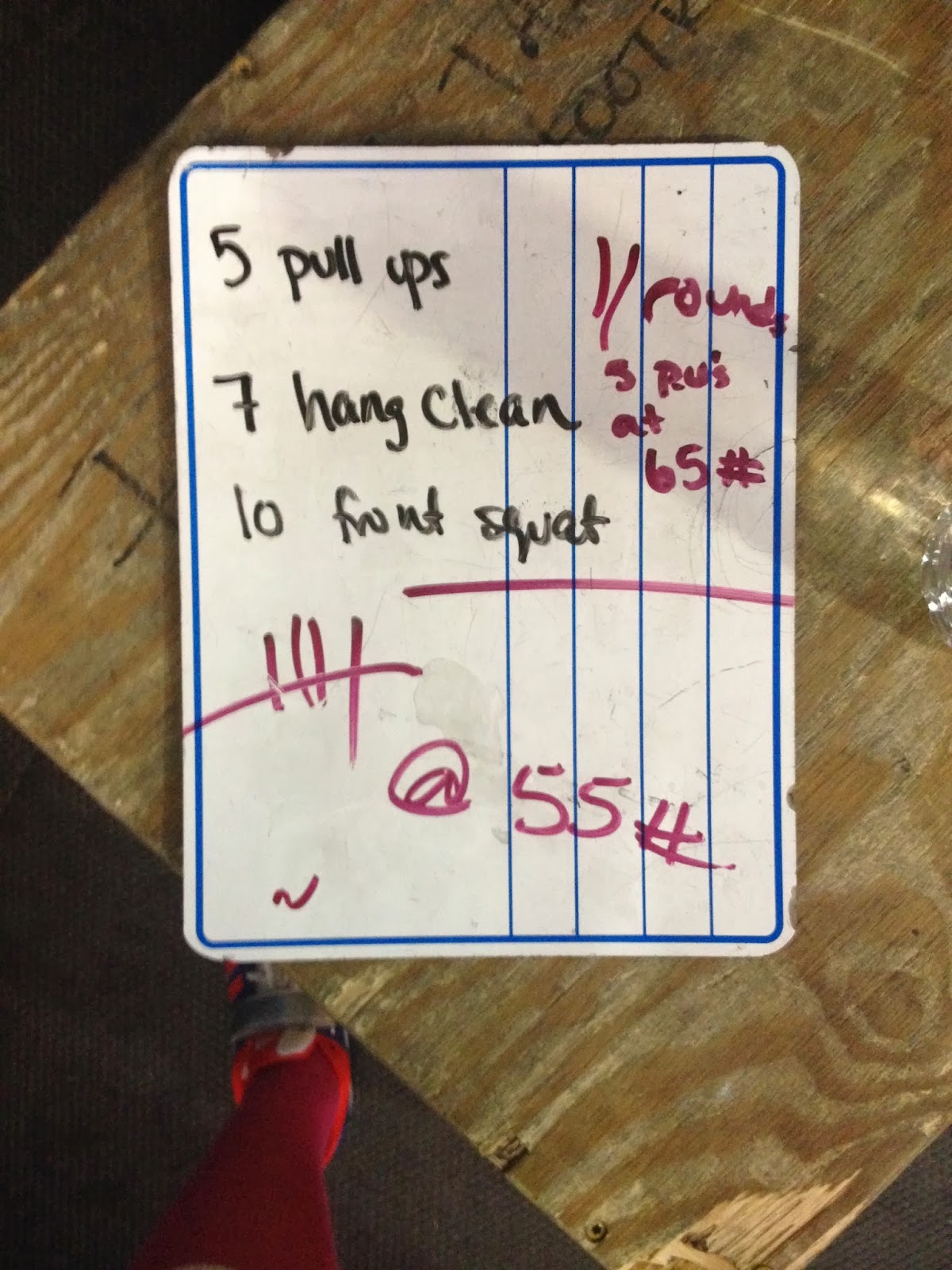 I made it to CrossFit Central LI for an awesome and challenging WOD. It was an opportunity to practice pacing myself and pushing through mental roadblocks. And since it was a triplet in multiples of 3, my number 3-obsessed pattern-loving mind had a wee of a time breaking down the movements. I did the first 21 hang cleans unbroken but figured out quickly that I wouldn't be able to keep that up. From there I worked with multiples of 3 on the push-presses (7-7-7, 6-6-6 and so on) and crushed the GHD sit-ups. Ever since Rachel's birthday WOD, my shoulders kill whenever I attempt toes to bar. 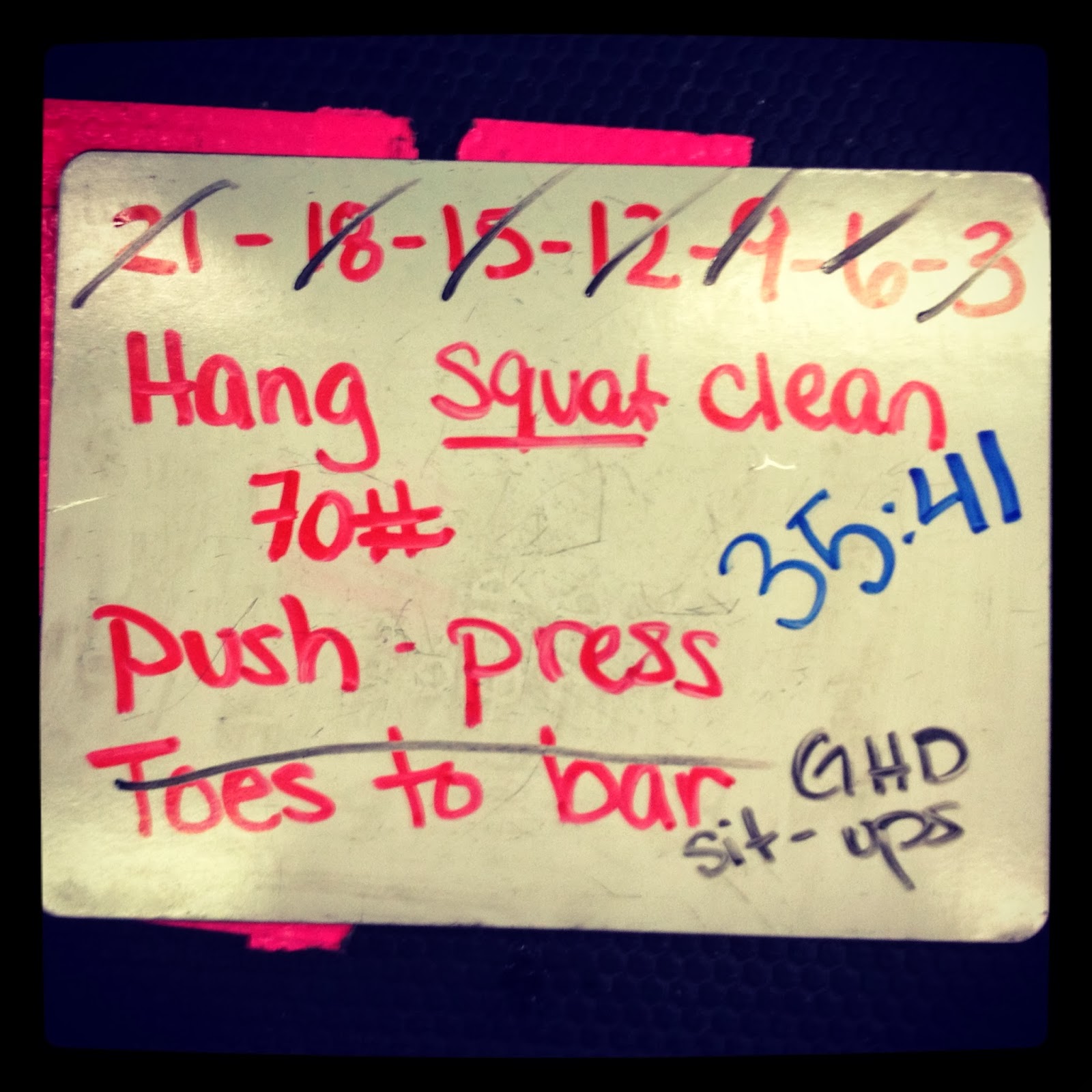 Reasons I Tend to Talk to My CrossFit Friends First

I swore I wouldn't be one of those people who became obsessed with CrossFit and got all new friends. Hah. I am obsessive compulsive by nature, so obviously I was going to go all in upon drinking the Kool-Aid joining the community. I do still have non-CrossFit friends, even if I am slowly convincing each one to join a box, but I tend to talk to my CrossFit friends more often and when given a choice to discuss things that interest me, I go to them first.

1. When I say I'm eating paleo, they understand that I am not on a juice cleanse and they don't try to offer me edamame. They commiserate over the initial pain of the Whole30 Challenge. They share every way they have ever cooked a sweet potato.

All last week I was dying to get out to Long Island. I was in need of a Siberian Soul Reboot.

I made the 4 PM WOD at CFHK on Friday. It was a special blend of awesome and fml. I PR'd my sumo deadlift at 203#. Here's the video of me completing 2 reps. My form goes to shit. I have to be more aware of rounding my back.