I regularly see people asking how to track food at restaurants if the nutrition information isn’t posted. They go all meltdown, forgetting that the nutrition information at chain restaurants isn’t 100% accurate anyway. You do not have to eat at Applebee’s unless you want to if you’re tracking macros. I eat out frequently because I travel so much for work. Sometimes I eyeball portions. Sometimes I will weigh one item and then multiply it. So for example, if I weigh a piece of pineapple at the breakfast buffet and it weighs 11 grams, I will take 6 pieces and log 66 grams. And sometimes I’m eating alone in a nearly empty restaurant and I put my food scale on the table because I give zero fucks.

It’s really about making the right decisions for your goals. If you eat out once a week, eyeball the portions. If you are dining with people who might be weirded out by your food scale, like clients, eyeball the portions. If it’s your birthday, you get infinity macros. But if it’s just you or you are with other macro-counters, break out the scale. I’ve seen people get really aggressive online about how carrying a food scale around with you is eating disorder behavior and you should only weigh food at home. Well Martha, I’m envious of your 9 – 5 PM job with your designated lunch hour, which you take in the break room equipped with a refrigerator and microwave. I see that you went away exactly 2 days in the past 52 weeks and that was to your sister’s house for Thanksgiving. Tell me more about how to live my life. Martha is a bitch and she can’t tell you how to reach your goals. If you become overly reliant on your travel food scale, give yourself a break. But if you would like to learn how I use mine in restaurants without looking like a total nutjob, I took photos last night.

Step 1: Review the menu for what you want to eat. I recently started tracking 7 PM to 7 AM, which has made choosing what to eat so much easier for dinner. Basically I start fresh at 7 PM allowing me the greatest amount of flexibility. If dining out, I either choose something similar to what I would make for myself, or whatever the restaurant or city is known for.

Last night I chose the honey baked salmon with vegetables and a dessert from the hotel restaurant menu. I make salmon for myself but I don't know how to honey bake it. I actually didn't realize that my selection came from a daily specials menu that included dessert. Normally I wouldn't order dessert unless I really wanted it but I like apple cobbler and I paid for it, so I ate it. 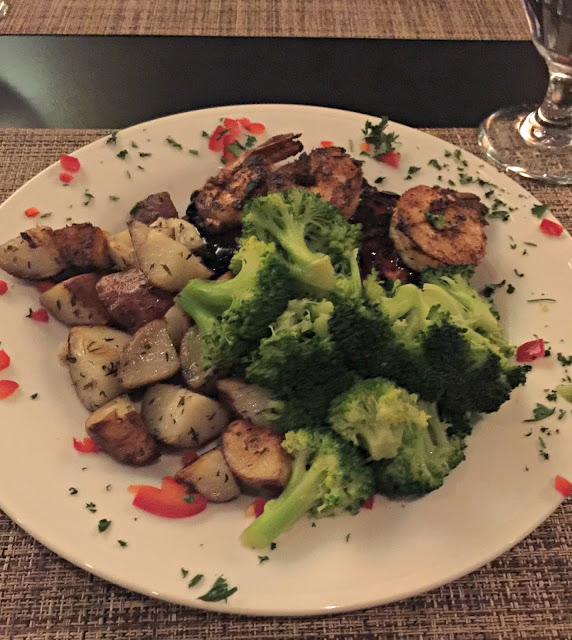 It's been over 7 months since my last Weight Loss Wednesday post and I've spent that time on a reverse diet. My goal during this period was to be compliant to my macros and gradually increase them. If I gained 0.6 lbs or less a week, the Avatar Nutrition would increase my macros. If I gained more or was non-compliant, the system would hold my macros steady. My macros have gone from 137 P 194 C 63 F to 118 P 305 C 101 F. It's been both fun and challenging. 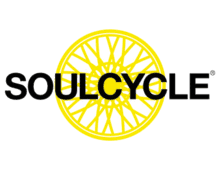 I don't usually feel out of shape or nervous when I'm in a gym or fitness studio. I've been blogging about going to the gym and fitness studios for eight years. I've been showing up to them for six years before that. I'm pretty confident in my ability to do the movements or be able to laugh at myself as I learn how to do them. So I signed up for SoulCycle the other day because there's a studio literally down the street from the hotel in which I was staying. I put myself in the front row, because, you know, I'm in the top 3 on the leaderboard whenever I go to Flywheel. And I have been to SoulCycle twice before in 2013 and 2014. I felt prepared for class.

Oh how I was wrong.

I very quickly realized that whatever the people around me were doing, was not what I was doing. It was choreographed and it looked really cool to see them perform synchronously. And then there was me bopping around on the wrong beat. The lights are really dim. There's no monitor to help you gauge how to adjust the flywheel. At Flywheel they tell you to set it between 15-18, over 34, between 25-27 etc. Here, it was all 3 full turns on the bike! Three full turns from where? A flat road? An entirely-to-the left knob? I also learned pretty quickly that I skip a pedal beat each time I try to adjust the wheel, which apparently has never caused an issue in a spin class until I tried to keep up with this bunch.

I was embarrassed. I kept thinking that other people were thinking that I didn't belong in the first row. I was also wearing pants that didn't fit, so that didn't help me at all. You should try spandex on when you find it in your bedroom closet at your parents' house, especially if it still has the tags on it.

I, instead, returned to SoulCycle on Thursday morning with a mild hangover from the cheap ass wine I enjoyed at the aforementioned company party. You sign up for the specific bike that you want when you sign up for class. After Tuesday evening, I considered asking for another bike that was not front and center by the instructor. I fretted about it. I told myself I didn't deserve a bike in the front and that I would distract the other riders with my inability to do choreographed push-ups on multiple handlebars while following the beat of a song that I'm damn near positive would never play on Atlanta's 94.9 The Bull (which a is a pop country station with an affinity for Luke Brian that is often on in my car.) But I also considered that this was the 8 AM class and the hardcore really good people were probably already on their way to work and that maybe I should just tell my brain to shut the hell up and keep my bike.

I thought about my friend Jen. We met at the tennis court at sleep-away camp when I was 12 years old. My bunk was filled with cliquey bitches and I was sad that I didn't have any friends. Jen told me she would be my friend and told me there was an empty bed in her bunk. Her bunk was for the girls slightly older than me but she said she'd help me talk to the counselors and see if I could move in. I did that week. And I lived with that bunk for two summers after that. Jen is still a fantastic human being. She is a great wife and a great mother. Her kids are the kids you dream of having. They are thoughtful, moral, funny, and beautiful - just like their mom.

Jen started her fitness journey last year. She impresses me every day with her commitment. She looks great and she's trying new things. She recently tried a spin class. Apparently she's been hesitant to go even though the instructor kept telling her to try it. I told her she had to try it. What kind of person would I be if I told my friend that she had to go try spin class, but then I hid in the back corner because I was embarrassed that I wasn't the best person in the SoulCycle room? So I kept my bike, I asked for help setting it up because that thing looks nothing like what I'm used to, and I clipped in. And I did much fucking better than I did on Tuesday. I had a great time. I felt why people are obsessed with SoulCycle and call it a religious experience. I stepped out of my comfort zone and it felt really good.

A pipe froze and burst in my neighbor's apartment last week. After stubbornly insisting that I did not need to move into a different apartment and camping out on my couch, I have officially been displaced today as the contractor blocked off my bathroom to take down the ceiling. The dogs and I sought refuge at a dog-friendly hotel. Of course, we could have stayed in one of the dog-friendly hotels in midtown Atlanta, but instead I chose our hotel based on its proximity to my gym.

The Red Roof Inn is most certainly a motel, but it's growing on me. The employees are courteous and helpful. This Superior King room is larger than my New York studio apartment. We ate delicious fajitas from Taqueria Los Rayos while watching Catfish. We even made friends with a nice girl named Kelsi while we were out for our bedtime walk. Things could definitely be worse. 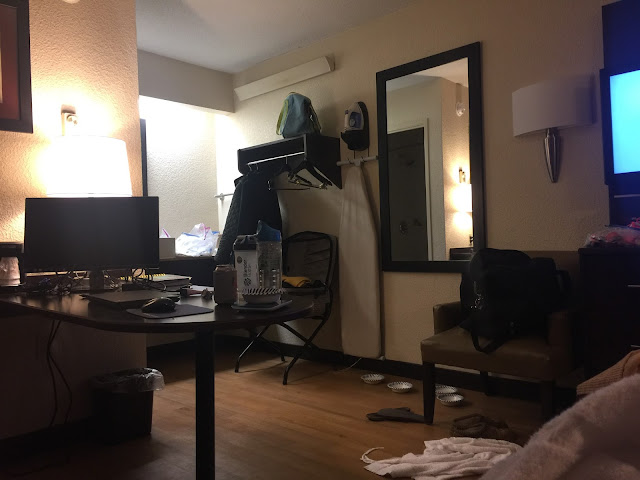 I can't stop thinking about Gone Girl and that I might find some unsavory characters ready to kill me for my meager worldly possessions. It's probably going to be the shirtless guy with the long braided ponytail who keeps alternating between sitting in his pick-up truck directly outside of his motel room and giving me dirty looks as he walks back inside.

Frank apparently loves motel living. Daisy Mae, poor thing, keeps looking for her bed stairs. I'll have to pick them up from our place tomorrow. 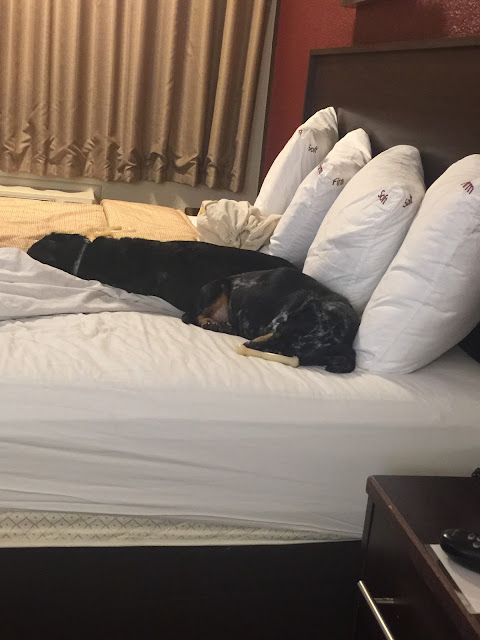 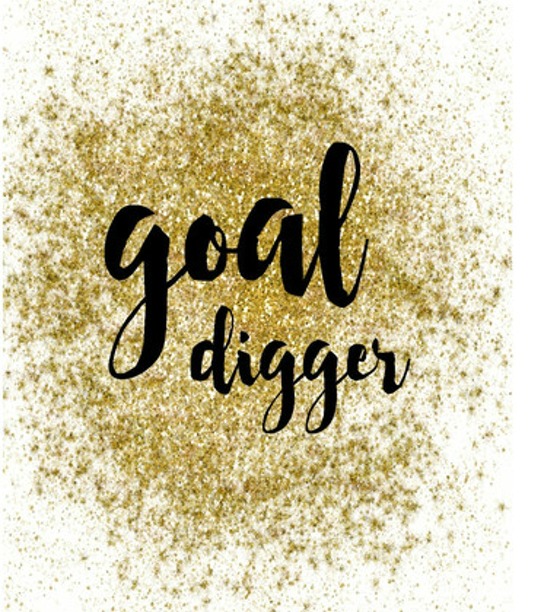 It's a new year and I've got some new goals. One of my goals this year is to actually post my monthly goal update in a timely manner. My primary goal is to lower my stress and anxiety so that I can enjoy my life and stop grinding my teeth.

Get flexible and go to yoga 50 times: A Baptiste yoga studio opened near my apartment and I'm looking forward to checking it out. I enjoy Bikram yoga as well and that's been helping my back feel better.

Go to Pure Barre 50 times: I really liked Pure Barre Inman Park when I checked it out in December. It's right down the hill from my apartment. They have a 7 AM class that I intend to go to a couple of times a week.

Repair my metabolism by spending 7 months in maintenance: I have been on a reverse diet since June and I increased my calories to 2,600 a day. Now I need to spend 7 months in maintenance so that my metabolism adjusts to these calories and my weight evens out. This will allow me to cut at higher calories. Thirty-four weeks at maintenance is going to be difficult mentally, but I am committed to following through on this process.

I'm not giving myself specific goals for wellness but there are areas that I would like to improve.

Work between 9 AM and 5 PM unless there is a big project or extenuating circumstance. This is a big source of my stress. I enjoy the flexibility of working from home but I have had so much work these past two years that I feel a lot of stress and guilt if I'm not always working. I blocked out a schedule that structures my time more effectively. With the help of my new hires, I hope to have a 9 - 5 job one day.

Spend less money. I spend a lot of money on things I don't need like new gym clothes and restaurant dinners. I would like to reign in my spending a bit and increase my savings.
at 1/01/2018 02:47:00 PM No comments: