I wore my Fleo shorts because I love neon and animal prints and not wearing pants. I love Fleo because they have great customer service. My fantastic boyfriend bought these shorts for me, but now I think he regrets it since y'all can see my butt cheeks. 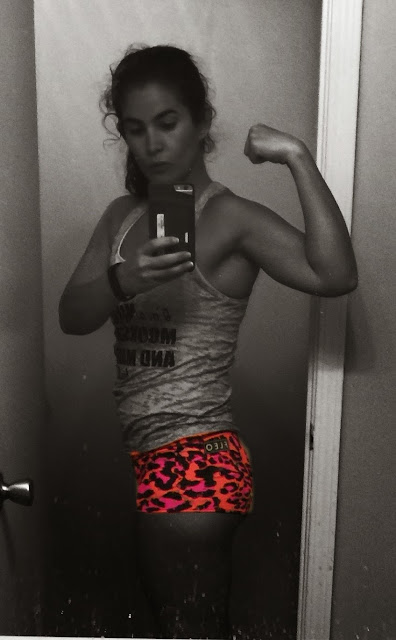 I was happy that I had a faster time the second round. 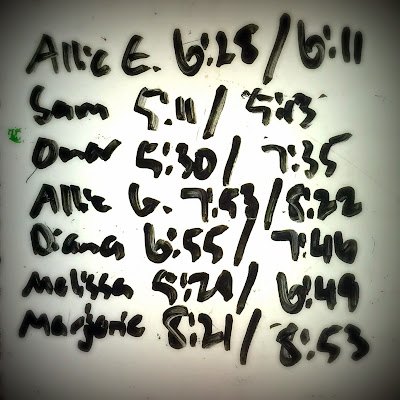 My shoulder has been acting up for over a year. There's nothing wrong with it and I'm not injured. I just don't have the mobility that I should and I need to work on it. My friend and fellow 4 PMer, Dr. Sam did some dry needling on my lat the other day and it's made a big difference. I could definitely tell that I have a better range of motion when doing the 50 thrusters today.

On Wednesday, May 13, I was attacked on my walk back from run group. It was 9:15 PM on a well lit street, less than 2 blocks from my apartment. My attacker got out of a car, sneaked up behind me, jumped on my back, and started to choke me with one arm while grabbing at me with the other. He stole my phone, credit cards, and driver's license and left me with scrapes, bruises, and a sweet case of PTSD.

This was the most terrifying experience of my life. I didn't know if he was trying to kill me or if he had a weapon. He never said a word. If he just wanted my phone and had demanded it, I would have handed it over. No phone is worth my life. I was able to fight him off and I chased after him with some eyewitnesses, but he made it to the waiting car and took off. This is an active investigation and I have been able to identify my attacker in gas station surveillance footage.

I know that this is not my fault but I wish I had trusted my instincts when I saw the car of teenagers cut me off. They didn't look like they lived in my neighborhood and they cut off a pedestrian, which is a faux pas in this area.

I want to share some things that I did that I think saved my life.

I made myself the center of attention. The minute I felt that bastard's hands on me, I started screaming, "Help! He's attacking me!"

I left no doubt about what was happening. Eyewitnesses said it looked like a friend or boyfriend was coming up to give me a hug from behind. But when I started screaming, "He's attacking me!", it became clear that this was no friendly joke. Many people ran towards us, which made him run away. I continued to scream, saying, "Help! That man attacked me!" as I chased him down the street.

I had over 10 eyewitnesses. I'm not sure if this saved my life, but it really helped with the police report. Neighbors sitting on their porches were able to identify the make and model of the car even though they didn't see me get attacked around the corner.

I tweaked my back something fierce a couple of weeks ago and I've been taking it easy easier and focusing on getting back in tip top shape. That means less CrossFit, more walks, and some quality time with Frank since I got back from Phoenix last week.