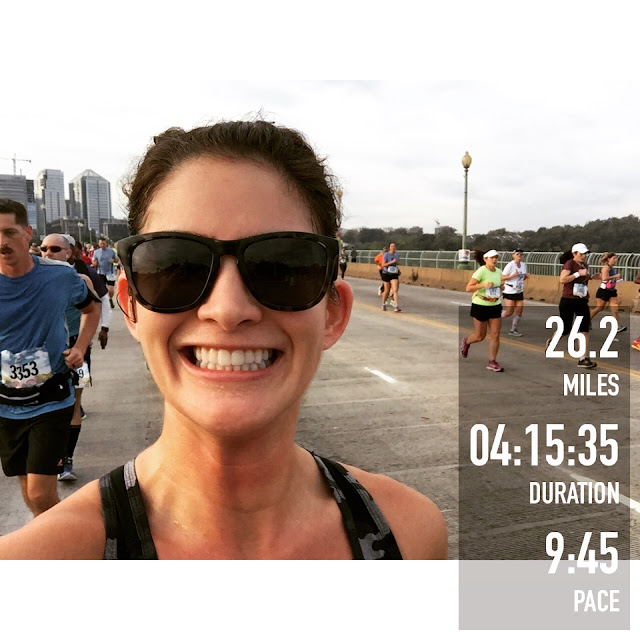 Guys, I ran my fastest marathon yesterday! And I didn't even train for it. I've been dreading this race for months because I just couldn't get myself to commit to a training plan. I don't like running alone in the daylight during the summer in Georgia. It's boring and it's hot. I just can't bring myself to run at 6 AM when it's still dark out. Thank you Quantavia Rivers for ruining my ability to train for marathons like a normal person you son of a bitch. I hope the Georgia state correctional system misplaces you again and forgets to feed you.

I woke up a little after 5:30 AM and started getting ready. I drank a Boost shake and covered myself in Bodyglide. The weather forecast said hot and I planned to run in only a sports bra and shorts. To keep warm before the race, I wore a sweatshirt with a broken zipper that I wouldn't feel bad about losing at the starting line. 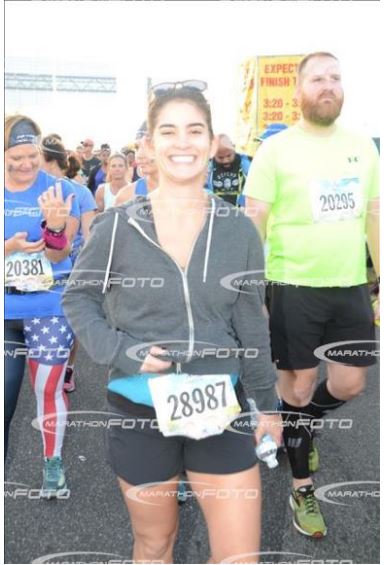 I'm staying at the Hilton Crystal City because it is only a block away from the shuttle to the start. Runner Village opened at 7 AM and so I thought leaving for the shuttle at 6:15 AM might be a little early, but I'm glad that I did. The line is INSANELY long. I made some friends and we chatted about running and our jobs. One guy works for Brooklyn Brewery, which is neat. We got to meet Marines as they helped load us on the buses and send us on our way.

This is probably a good time to let my newer readers know about how much I love the Marines. I am blessed to call Marines my friends. I am honored that these men could have done whatever they wanted after they graduated from college, and they chose to join the Corps to keep America safe. I take their service very seriously and love them for it. I firmly believe that we live in the greatest country on earth. I flew here to Arlington on my own and I am staying at a hotel by myself, paid with money that I made and I didn't have to ask any man's permission. I ran around in just shorts and a bra yesterday. No one forced me to cover my body. No one tried to shoot me in the head for having a master's degree or being a vocal advocate for education for all children, boys and girls, of all skin colors, faiths, and backgrounds. I am able to do these things because men and women are willing to fight for my freedom. Having the opportunity to honor and thank the Marines was such a meaningful experience to me. I tried to thank every person I saw on the course for their service. 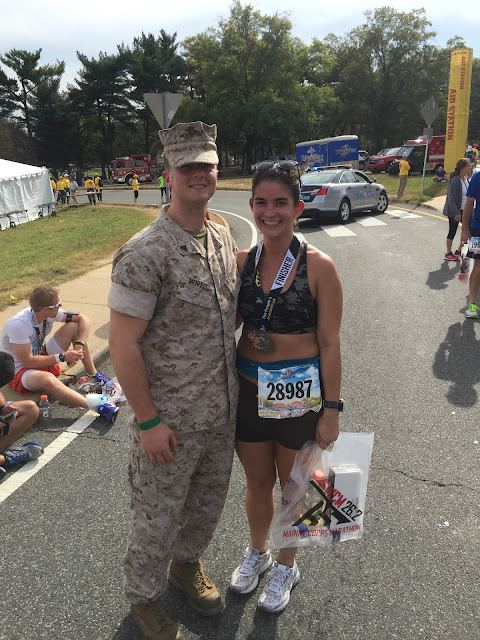 The race starts at 7:55 AM for the elites and then everyone else is lined up and gets to start whenever they cross the mat. I saw signs for expected finishing times but I guess you had to arrive really early to get in the right position in time for that.

My plan was to run by feel. I wanted to find a pace that I could maintain throughout the race instead of dragging my ass throughout the end like previous races. I mostly stayed between 9 and 10 minutes miles. I didn't wear headphones for most of the race and chatted with a few people. I met a girl named Bethany from Atlanta who is part of Oiselle Volee and I asked her about the membership. I'm considering joining if I stick with running. I mostly kept quiet and enjoyed the energy of the crowds. There were so many spectators with signs and dogs. We all know how much I love dogs. We also got to enjoy some live bands, which was pretty neat. 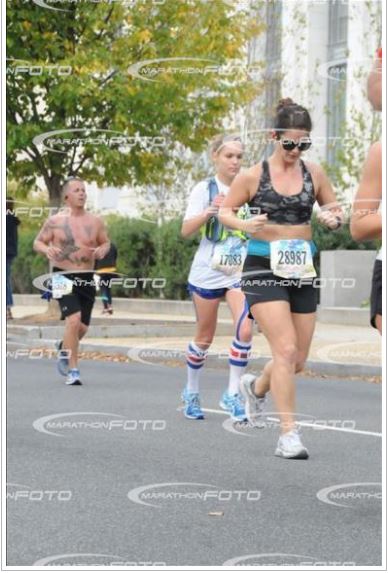 I felt really good for the first 10 miles. Like bizarrely good. Especially because the 10 mile marks at my two half marathons this summer were pretty painful. The weather not being 95 degrees and humid probably had something to do with it. I felt incredibly thankful to have the opportunity to run and I was enjoying myself. I stop at a porta-potty around this time, which also added to my level of happiness. 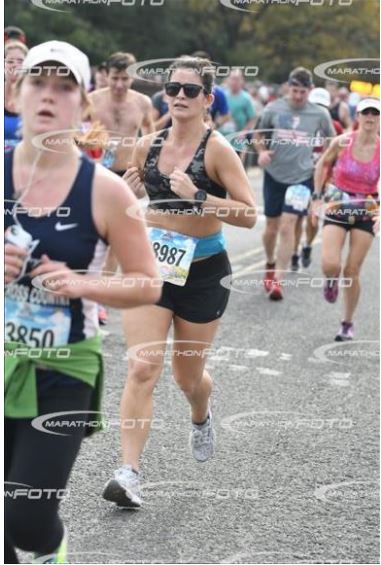 I did a much better job on hydration this year. I drank 1.5 liters of water throughout Saturday evening. I drank about 10 ounces of water and large coffee on Sunday morning before the race Sunday morning. This made me have to pee several times before the start, but otherwise I only used that one porta-potty on the course. I carried a half liter of water on the course and skipped the first few water stops. I ditched the bottle when it was empty and relied on the stops for Gatorade and water for the rest of the course. Next time I will start using the stops earlier so I can save the water for later when it gets warmer. The water stops are spread out and not at every mile marker. 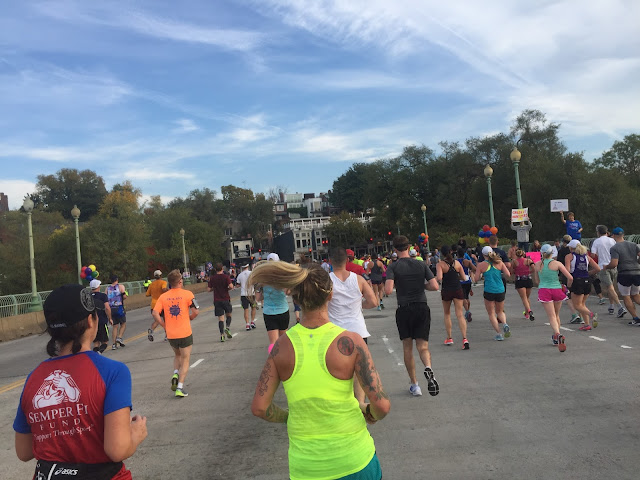 My CrossFit coach Brandon was once explaining how to tackle a large volume of work to the class. He compared it to running a marathon and how you don't think of the entire distance and only focus on running a chunk at a time. To my knowledge, I was the only person in the room who had covered 26.2 miles 8 times at the time, and that's not how I approached running them. I thought about reaching certain mile markers by certain times. So I tried something different yesterday. I thought of the last 16 miles as four 4 mile runs. I didn't give myself any incentive to get through them (nothing like being able to walk or getting another gel), and I wasn't sure it would work but I think the strategy kept me focused and allowed me to maintain my pace. Of course I could run the next four miles at 9:45s. It seemed a lot more feasible than 16 miles at that pace. So I owe Brandon an apology since I rolled my eyes at his comparison. 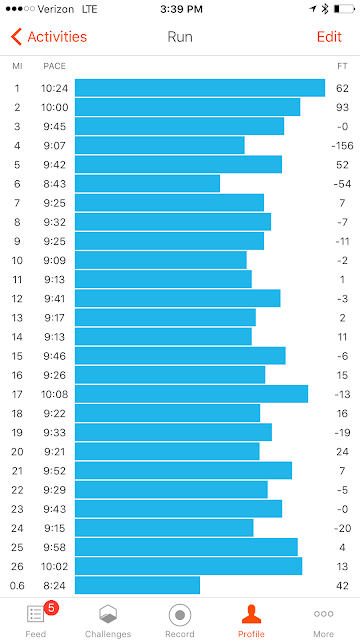 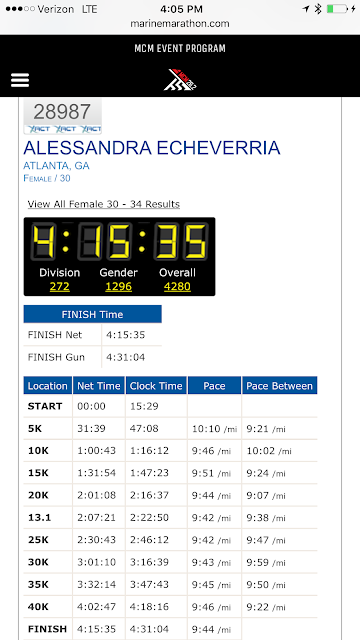 We continued along the Potomac River and through the emotional wear blue Mile section of the course where fallen service members are commemorated along the roadway decorated with American flags. It is overwhelming to see how many men and women have sacrificed their lives for us. I began to cry when I passed Lt. Michael P. Murphy's sign.

Then we got to run around DC. I ran the DC Cherry Blossom back in 2011 and I think the course was really similar to this section. It's beautiful and we got to see a bunch of monuments and run around the mall. 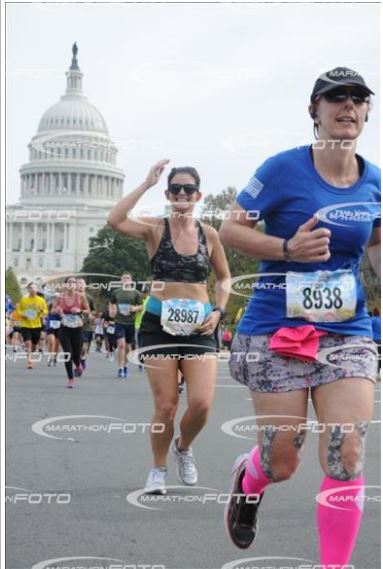 Mile 18 was rough. It had gotten a lot warmer, there wasn't much opportunity for shade, and we didn't see any bands for a minute. As much as I hate runners who race with headphones, I decided I had to put mine in if I wanted to continue at my pace. Best decision I could have made. The course had opened up substantially by that point and I don't think I was a danger to people. You really have to be aware of your fellow runners if you're going to listen to music. One runner told me how she had been knocked down and then left on the ground by a guy wearing his headphones earlier in the race. Don't be this guy. He's a dick. 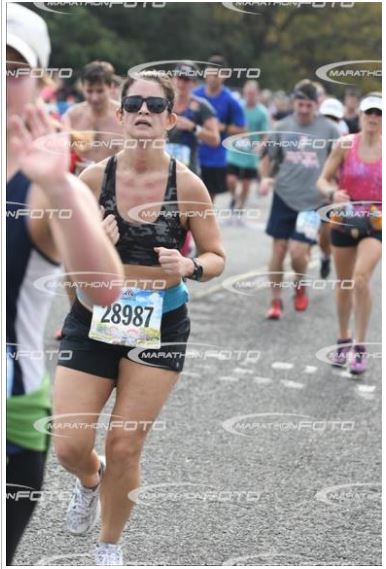 My Garmin had me at .4 miles ahead of the course markers, which got discouraging because it would tell me I had reached the next mile and then about a half mile later, I'd see the mile marker and just be like eff. All sorts of weird math was going through my head. At mile 20 I realized I was on track to my PR my marathon! 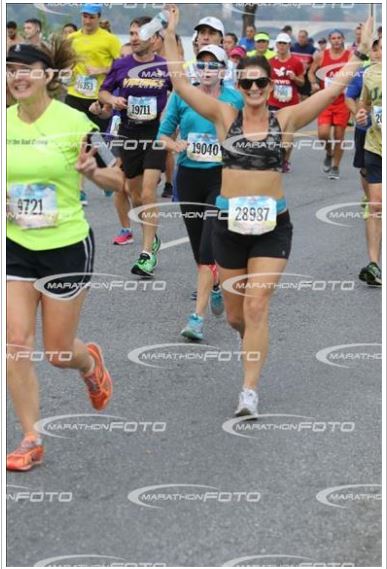 I made it to mile 22 and only had one more 4 mile run plus the 0.2. My feet hurt. My knees hurt. I really wanted the race to end, but I tried to put myself back into the moment. I was doing really well and I was pretty close to the finish line and maintaining a strong pace. I also reminded myself that I'm not running another marathon for a long time and to enjoy this one while I was in it.

A lot of people were walking between miles 23 and 26. They were hot and cramping in the 75 degree weather. Most of them hadn't run in 85 degree weather on Friday like I did. I felt fine and told myself that no matter what happened around me, I had to keep giving it my all. It's like at CrossFit, when you go to the class where everyone takes leisurely water breaks between burpees, you feel like you can stop for a moment to catch you breath too, but you go balls to the wall when you go to the class with the crazy people who do everything unbroken. I needed to imagine that I was surrounded by people who weren't stopping at any cost.

I finally made it to the 26 mile marker and then got to run up the hill to finish the course. My new friend Brad from dinner Saturday night had warned me about this hill and said it wasn't as bad as it looked. Thank goodness he shared his wisdom because I kept his words in mind as I charged up the hill and finished in 4:15:35.

I made it across the finish line and into the corral to receive my medal from a very attractive Marine. I wanted to invite him back to my hotel room but I thought it would be rude to hold up the line. 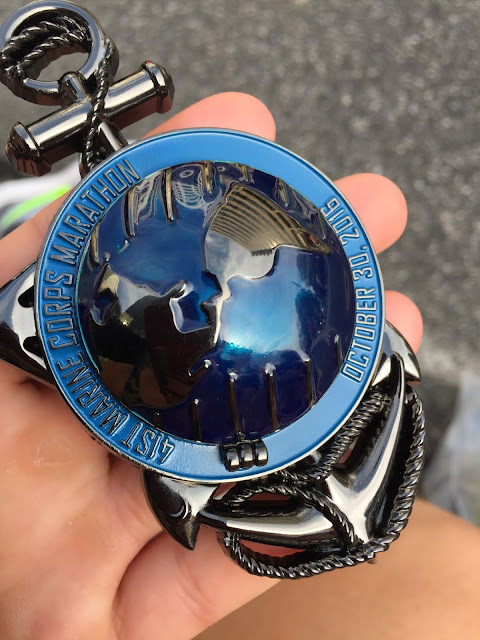 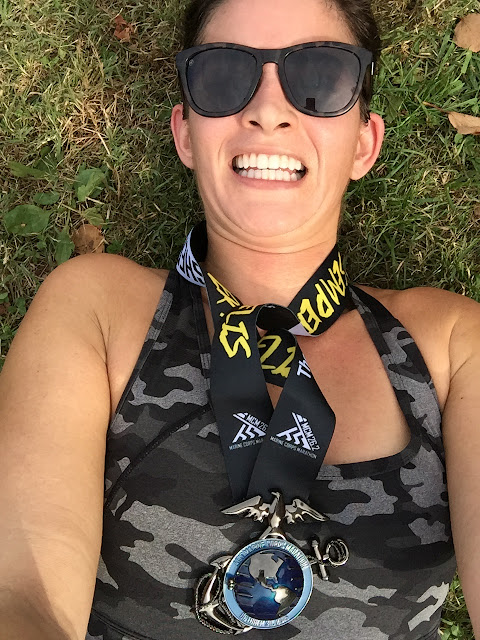 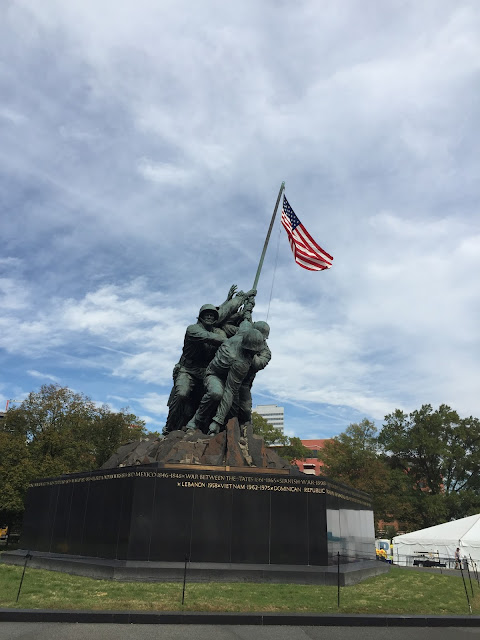 I lay down in the grass because I felt like my death was imminent. I met my new friend Zach, who was also lying in the grass. I told him I had admired his tank top during the race and then we realized we both wear Knockaround sunglasses and we became fast friends. We hobbled out to the finisher's area. 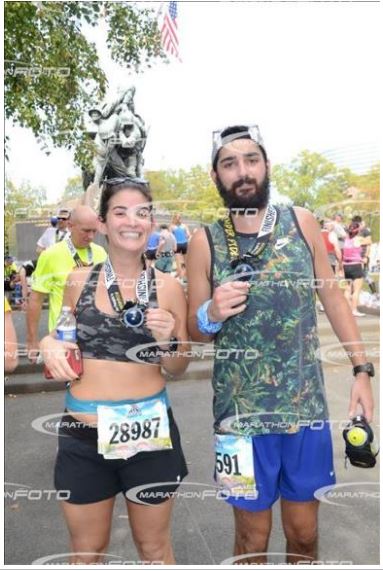 Zach went home to nap and I went in search of the beer tent. I just wanted to sit down again. 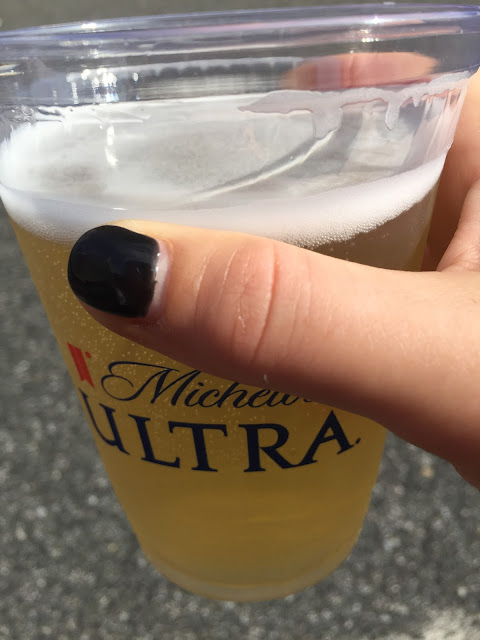 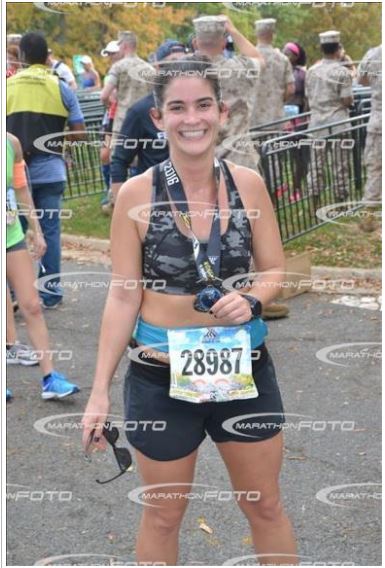 This fantastic lady gave me cut up watermelon. 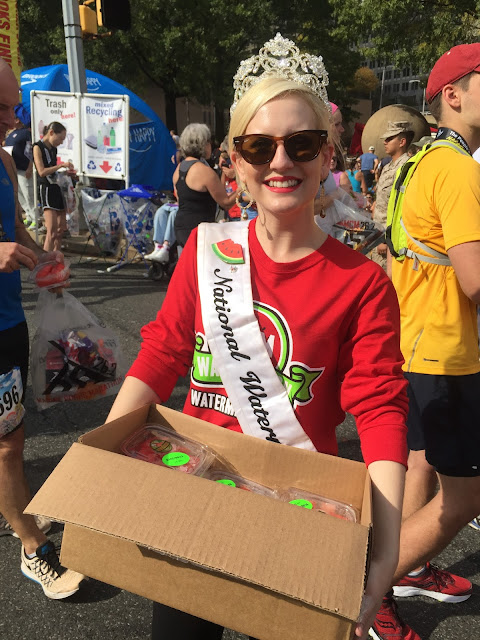 I made it back to the hotel, took an ice bath, lay around in bed wearing compression sleeves, and watched some Forensic Files. I then attempted to put on pants and vainly wore heels to go to a sports bar across the street to meet up with friends for football. 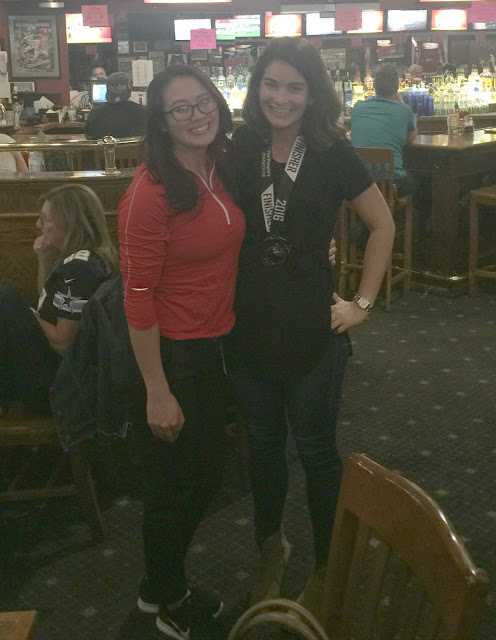 My friend Rena from my days at CrossFit Hell's Kitchen and her boyfriend Erwin were in town to volunteer with medical for the race. She's the best and I was happy to know that she would have my back if something happened to me. 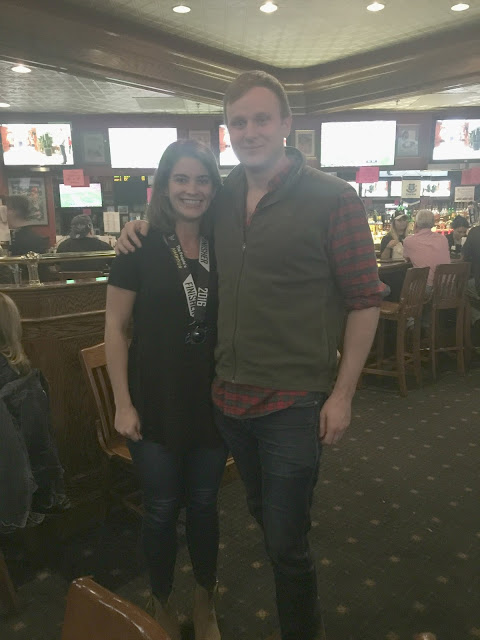 My friend Bobby moved down to Arlington a few years ago and it was so good to catch up with him. He knows all about politics and he has a great sense of humor so we had a bunch of laughs.

I'm trying to figure out which photos I want to buy from the race. If you like one of the ones with the watermarks all over my face, please comment below to help me decide.